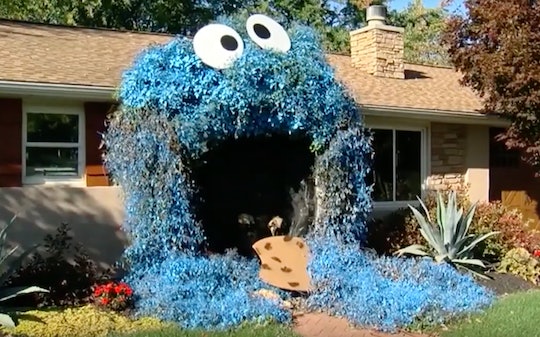 Halloween is that special time of year you can pull out all the stops with fun and quirky decorations. And while some might make their homes look spooky and haunted with things like fake gravestones and hanging bats, one Pennsylvania woman's Halloween decorations are all about Cookie Monster. And let's just say I'm thoroughly impressed, and suddenly craving a chocolate chip cookie...

Lisa Boll of York, Pennsylvania takes the cake — or should I say, cookie? — for transforming her front door into the lovable character from Sesame Street. To make her grand decoration, Boll spray-painted the vines growing around her home blue and made some larger-than-life eyes and cookies out of styrofoam to make her massive Cookie Monster complete, according to CNN. It's a home that would fit right in on Sesame Street — literally.

While trick-or-treaters will have to walk into Cookie Monster's mouth to get their treats on Oct. 31, Boll told Philadelphia CBS News affiliate, CBS 3, that there is nothing spooky about it. "It was surprising just how many people get a big kick out of it," she told CBS 3. "It's good. It's fun for Halloween and the fact that it's not a horror thing, it appeals to kids under the age of 3, especially, it's not scary."

OK, so Cookie Monster might have the word "monster" in his name, but anyone who has watched Sesame Street knows that he's anything but — he's just a muppet with a huge sweet tooth. Indeed, Cookie Monster is described by the Sesame Workshop as a "frenzied yet cuddly character on a persistent quest for more food," which sounds a lot like kids on Halloween who are on a quest to get as much candy as they possibly can. And since Cookie Monster's birthday is on Nov. 2, just two days after Halloween, it makes sense why he might have such a love of sweets. It's kind of hard to avoid them when your birthday is right after one of the sweetest days of the year, right?

Beyond serving as a creative Halloween decoration, Boll told CBS 3 that she was inspired to decorate her home in this sweet way because she is a "big" Sesame Street fan and the show is celebrating its 50th anniversary this year. And those celebration plans are just as grand as Boll's decorations. HBO will air a special episode of Sesame Street titled Sesame Street's 50th Anniversary on Saturday, Nov. 9 at 7 p.m., according to CBR. The special will offer a look back on the past 50 years, and some very special celebrities will stop by the street to sing songs and hang out with the cast. And hopefully, if we're lucky, Cookie Monster's hit song, "C Is For Cookie", will be a part of this special, too.

In the meantime, plenty of Cookie Monster fun is happening in Pennsylvania. And while it's not clear if Boll will be handing out candy bars or cookies on Halloween, it's pretty much guaranteed that her home will be a hit with the kids. No spooky tricks, just one big treat.