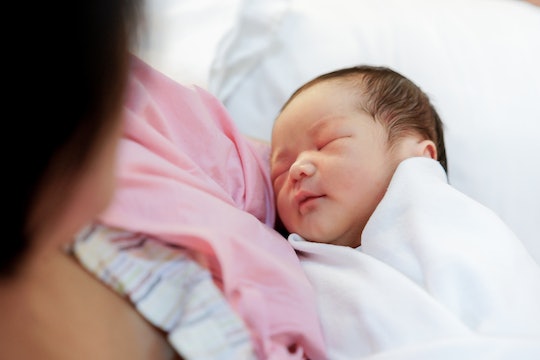 While it's long been the trend that the average age of a first-time mom varied a ton between big cities and rural environments, and between those with higher education versus those without that privilege, researchers are noticing that women ages 30 to 34 are having more babies than younger women for the very first time.

As Jezebel reported, NPR recently noted the trend on its Planet Money podcast, with an economist at the University of Notre Dame who specializes in studying fertility (who knew?), Kasey Buckles, explaining that economic recessions tend to leave a declining fertility rate in their wake.

But even after the economy revived after the 2008 recession, the United States is in a "baby-less recovery," Buckles told NPR.

Typically, Jezebel added, after a recession, pregnancy levels go back up as the economy also recovers. But a decade after the economic meltdown, American women are having fewer babies than ever before... with the exception being one category: moms who are 30 and above.

Buckles and researchers Melanie Guldi and Lucie Schmidt noticed this trend — literally, a historical first — and have tied it to an overall shift in demographics.

There are a couple details related to what is making thirty-somethings into the leading category of expectant mamas.

For one, NPR detailed that younger women are experiencing fewer unplanned pregnancies, which is responsible for a large chunk of the general decline since 2007.

The NPR piece further pondered whether this is due to Obamacare offering expanded access to contraception and abortion. (In a related anecdote, Vox reported that the teen birth rate hit an all-time low in 2016, after the Obama administration increased access and affordability regarding contraceptives.)

In this case, however, study author Buckles also surmised, according to Jezebel, that the sharp decline in millennials' parenting rates among women below 30 may be linked to cultural questioning about the importance of marriage and family, especially when student-loan debt and financial concerns are a common occurrence.

Meanwhile, rising income inequality and the United States' astonishing lack of public policies that make family life workable have just got to be in this mix as well, as Jezebel noted... when in other first-world countries, policies such as, oh, paid family leave and a silly little idea called reasonable childcare are an actual thing.

How could this not make younger Americans think twice about procreating?

With the demographics of average mom-folk turning a bit older (think a thirty-something Jersey Shore alum having a baby, such as Nicole "Snooki" Polizzi, or Younger's Hilary Duff, rather than an early twenty-something Duggar sister, you know, if life was television), it sounds perfectly fine at first, a mere harmless statistic, right?

But think about it: While Buckles and her team found that a steep decline in unplanned or unintended births saves taxpayers somewhere around $2.4 billion per year, a continuing downward cycle of births would eventually result in not enough workers.

That would mean not enough economic prosperity to support what would be tomorrow's aging population, who would need Social Security after their productive years.

As Fast Company detailed, the Centers for Disease Control and Prevention has announced the 30-year-low in fertility rates means that the country is 16 percent behind where we need to be to replace ourselves as a workforce population.

Now, that is not a good thing at all.

Not to mention Buckles and her team actually see babies as a "leading economic indicator," meaning the direction of where things are headed, and this theory means the decline in births could potentially indicate another recession, NPR added.

We will have to watch and wait as far as the country's finances. In the meantime, it's interesting to note the age of first-time moms overall seems to be catching up to what I've generally noticed in big cities like Los Angeles, New York, and London for some time — places where famous — and mostly thirty-something — new moms and moms-to-be reside. (Think Rachel Platten, 37, and Meghan Markle, also 37, both of whom are technically above the age range of the new findings, which ran from 30 to 34.)

I'm excited for those mamas and hope the future holds good things for their kids, maybe with the help of better societal ideals about how families can work and raise the next generation. Call me crazy.

More Like This
The “Tripledemic” Is Scary, But I Feel Less Helpless When I Wear A Mask
The 4 Main Parenting Styles & Which Is Best For Kids
Here Are Parents' Top Trending Searches In 2022, Because Google Really Is Our BFF
Over 10,000 Sippy Cups & Bottles For Toddlers Recalled Due To Lead Poisoning Hazard