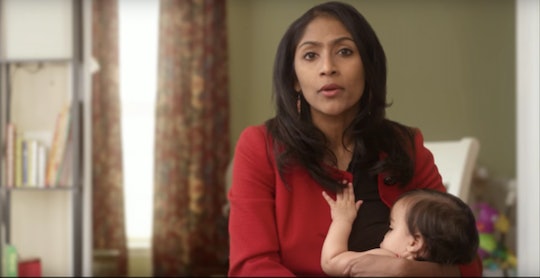 These Women Are Breastfeeding In Campaign Ads, & Here's Why That's So Important For Moms

Debates around breastfeeding have become increasingly relevant on social media, with more and more mothers stepping up to share stories about being harassed and even kicked out of public establishments for it. It might seem like a trivial topic, but it’s a necessary conversation to have and one that’s started to turn from just a women’s issue into a voter’s issue. Recently, two women running for governor positions, Krish Vignarajah and Kelda Roys, featured themselves breastfeeding in their own campaign ads.

Campaign ads have always been interesting, because they often feel like or are being used as attention-seeking moments. The point of a good ad is to capture people’s attention and remain memorable, after all, but these two candidates manage to do so without becoming a spectacle. What’s important about their ads is not only does it speak to parents who have faced backlash for breastfeeding, but it pushes the conversation into new light.

In 2016, a study by the Barbara Lee Family Foundation found that voters have more doubts about a mother’s ability to juggle work and family than they do about fathers. For women, running for political office has always meant being pushed to keep families and personal lives out of the picture, in attempts to side-step some of this bias.

The study found that voters will raise questions about a candidate’s role as a mother during campaign discussions; ironically, they recognize that it’s a double standard and are consciously choosing to participate in it. Like with any bias, it's important to confront it, which is exactly what Vignarajah and Roys have done.

The first ad opens up on Krish Vignarajah, who is running as Maryland’s lone female candidate for governor, a point that she confronts directly in the ad. “There are no women in statewide or federal office in Maryland,” Vignarajah says in the opening, voicing over video of her breastfeeding her child. “This isn’t just about representation, it’s about policy.”

In recent years, Vignarajah previously worked as policy director for Michelle Obama. On her campaign websites, Vignarajah credits that experience working alongside one of the toughest, brightest, and most capable woman of our time as what makes her capable of addressing gender equity. “I have learned firsthand that the best way to address these challenges is to have more women in leadership positions,” her site reads.

The second ad features Wisconsin candidate Kelda Roys discussing her legacy of helping Wisconsin ban BPA, a chemical found in plastics like baby bottles and sippy cups that has been linked to health problems. In the middle of the ad, the shot briefly cuts to Roys’ husband trying to soothe their infant daughter crying off camera, before passing the child to Roy who begins breastfeeding and carrying on.

While it might be politically risky to flaunt motherhood in this way, it also positions these candidates as being able to uniquely appeal to women who have been largely alienated or viewed as unimportant in political discourse.

This handful of stories doesn’t even begin to scratch the surface when it comes to women being harassed for breastfeeding. Within the debate, a common “middle ground” has been to have mothers cover breastfeeding children with blankets, coats, etc. But not only do some babies not react well — many will scream and cry — there’s no reason to hide a child, or breasts, away like they’re something to be ashamed of. To have two candidates openly breastfeed in their ads with no additional pomp to it means that not only do women voters have representation to look to, but now all of those who ignored the issue before are being forced to reconcile with it.

The conversation has launched into the political realm before, most notably with a Virginia state representative breastfeeding her daughter on the floor of the House of Delegates and a D.C. city council member pumping breast milk during a committee hearing. Moving into midterms and elections, this increased push means that even men will have to start addressing breastfeeding and motherhood as a whole within their campaigns.

Luckily, response to the ads has been overwhelmingly positive, according to Roy.

“It’s been phenomenal. It’s been absolutely fantastic,” she told NPR. “And in a primary where we have a lot of candidates who are older white men — that is really what the field looks like — I stick out in a lot of ways."

Hopefully, over the course of elections, Roy and Vignarajah’s campaign ads will empower other women running for similar positions. For now, it’s clear that this election season will be an interesting one, with plenty of conversations to look forward to.