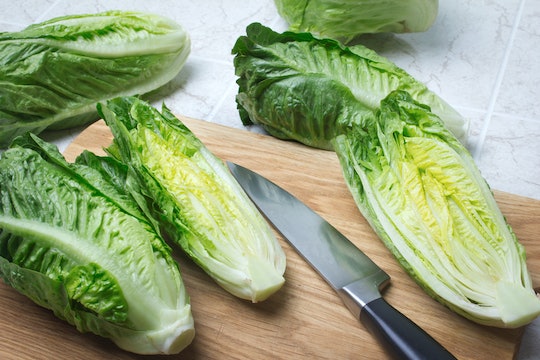 Many people have heard about the recent E. coli outbreak affecting romaine lettuce, with some Facebook memes on my newsfeed going so far as recommending people throw out any lettuce they have. But what's interesting about this outbreak is how it's showing a trend that lines up with previous E. coli outbreaks. According to a recent report by USA Today, women are mainly affected by the romaine lettuce E. coli outbreak.

Previously, the warning around romaine lettuce was limited to chopped forms, such as salads and salad mixes. Now, according to CNN, the Centers for Disease Control and Prevention expanded its warning to cover all forms of romaine, including whole heads and hearts, grown in the Yuma, Arizona area. This expansion came after eight new cases of acute gastroenteritis at a correctional facility in Nome, Alaska, which has connections to the current outbreak, according to CNN. As of now, the outbreak affects 53 people in 16 states, as CNN reported.

But, according to USA Today, 70 percent of those who've gotten sick in the current outbreak are female. This data lines up with outbreaks in the past, such as a 2016 outbreak traced to alfalfa sprouts, where the CDC reported 73 percent of those ill were women. Last year, when leafy greens were the culprit of an E. coli outbreak, USA Today reported that 67 percent of those affected were women or girls.

This poses the question: why are women so susceptible to E. coli outbreaks?

In the past, as reported by The Guardian, it was proposed that women react more to E. coli because of gastrointestinal tract differences. But, Dr. Bruce Lee, an associate professor of international health at John Hopkins University, told USA Today that there was no strong evidence of this. According to Lee, different outcomes between sexes are often driven by social and behavioral differences, not biological characteristics.

And when it comes to social differences between men and women around food, one big thing is that women are encouraged to eat more fruits and leafy greens, as Live Science explained. Think back to recent commercials of women on television. If they're eating chunks of meat, like a burger or steak, it's usually a representation of how unlike other women they are. Women are encouraged to be dainty eaters, and targeted within the dieting industry, which means they're more likely to turn to leafy greens and fruits.

In 2012, a study published in the medical journal Clinical Infectious Diseases found that out of nearly 15,000 men and women, a higher rate of men ate meat and poultry compared to women. On the other hand, women ate fruits and vegetables in higher proportions. This data included looking at the rates of consumption around runny eggs, pink hamburgers, and raw oysters, where men always came out at least 2 percent ahead of women, according to the study's findings.

Now, examine the flip side again: when an outbreak in 2015 came up, tied to rotisserie chicken salad, the CDC reported that 57 percent of people ill were female. But, as USA Today reported, according to Lee, another factor could be in the socialization around health. The high numbers of women could be a result of them relaying more information to medical professionals. In a society where any form of illness is treated as weak, and men are conditioned to constantly be strong, it makes sense that men may not report symptoms of new diseases as often, as Lee explained to the news outlet.

This outbreak of E. coli provides a surprising amount of insight into how socialization can have such a drastic effect on people's lives, including their health. So, remember, always account for socialization when examining statistics like this. For now, be sure to check if any lettuce in your fridge comes from the contaminated areas. As Ian Williams, chief of the CDC's Outbreak Response and Prevention Branch, told CNN, "This bacteria can actually get inside of the lettuce leaf. Washing it doesn't make it safe."