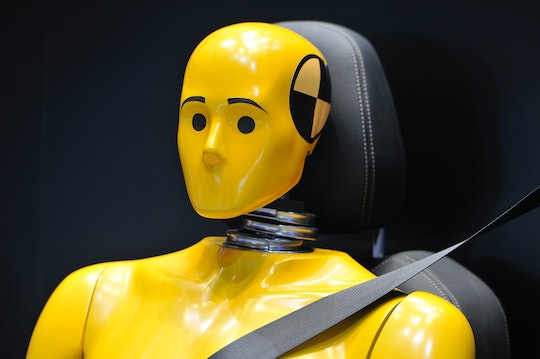 It's not exactly groundbreaking news that women have a higher probability of dying in a car accident, as troubling statistics regarding female deaths compared to male deaths in auto collisions have surfaced in recent years. Figuring out the why, however, hasn't been as straightforward — at least until now, that is. A recent study determined women are more likely to die in car crashes due to a frustrating reason involving the size of female crash dummies.

But first, a little backstory. In 2011, the University of Virginia (UVA) found that women were nearly 50 percent more likely to be seriously injured or killed during a a car crash when wearing seat belts, according to The New York Times. At the time, researchers placed the blame on posture and seat belts, arguing that women who were injured were of "relatively short stature" and "preferred seating posture and a combination of factors yielding lower safety protection from the standard restraint devices," according to USA Today.

A new study published in Traffic Injury Prevention on July 8, however, determined that the dummies used to test vehicle safety might play a role in this concerning trend. That's because manufacturers supposedly aren't taking into account the size of an average woman, which has changed considerably throughout the years. And this is a big problem because as researchers from the University of Virginia confirmed, the chance of a female dying in a car crash is 73 percent higher than it is for a male.

“We obviously know a lot of ways that men and women are different bio-mechanically," Jason Forman, one of the study's co-authors, told City Lab, while noting females' generally wider and more shallow pelvises, as well as differences in fat distribution and tissue concentration. "These differences … have the potential to change the ways that seat belts interact with the body and with our underlying skeletal structures.”

Unfortunately, creating new crash dummies that better reflect the dimensions of an average woman today will take time. And so will collecting the data in order to relate the dummy's performance to real-life injuries. “You never want people to get injured, but in order to gain enough info about the real world, we have to sit patiently and wait for real-world data to come in and for real-world specimens to come in," Forman explained.

The fact that women are 73 percent more likely to die or be injured in an accident is troubling, to say the least. But it's reassuring to me that this issue is receiving the attention it deserves, and, hopefully, new crash test dummies are on the way.

More Like This
Everything Parents Need To Know About Monkeypox
How Hot Is Too Hot For Babies? Experts Weigh In
CDC Says Schools No Longer Need “Test-To-Stay” Policy In New Covid Exposure Guidelines
Health Officials Are Offering About 1 Million Children In London A Polio Booster