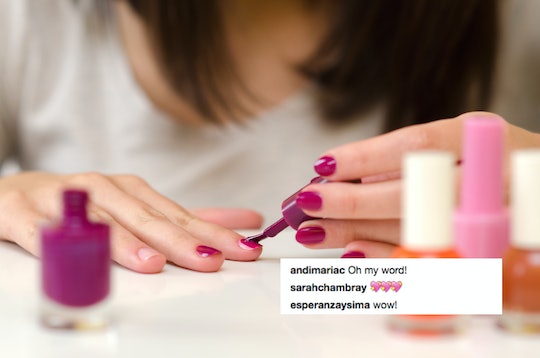 Over the past decade, the internet has outdone itself in the nail art department. From fur nails (why?) to pom pom-adorned nails, nail artists on social media have had no chill in 2017. Well, things have become even more incredible, because women are now painting vaginas (read: vulvas, but most of the world doesn't know the difference) on their nails. As one might expect, the internet can't even.

According to Cafe Mom, women have been painting vaginas/vulvas on their nails for some time now. Aptly called "vagina nails," the nail art is pretty graphic and realistic. Although some designs are more abstract (yes, I'm analyzing vagina nail art), a good percentage of the art could have come out of your average anatomy book.

To be fair, the internet should have seen this one coming. As recently as July, women were decorating their nails with "tampons." According to Bustle, Canadian nail artist Annelies Hofmeyr designed "tampon nails," which are white base nails topped with "tampon strings" and "red blood stains." Hofmeyr created the "tampon nails" in an effort to normalize menstruation.

Hofmeyr said, according to Bustle:

The inspiration behind the nail art concept is the popularity of the art form itself (especially on Instagram). As a conceptual artist I like figuring out the most efficient way to get a message across and that often means working in a format that is non-threatening.

So, is there some meaning behind these "vagina nails"? Uh, sort of.

One nail artist, Danielle Wegner, whose handle is @Pouncing_Paws on Instagram, used the feminist hashtag "pussy power" when sharing a photo of her "vagina nails." It's a powerful statement given how female genitals have often been equated with the opposite of power — adjectives used to describe them often include "gross" or "weird." So this nail art fights the idea that female genitals are something to be ashamed of in a pretty head-on way (or should I say they hit the nail on the head).

Still, it's important to note that equating feminism or womanhood with vaginas is problematic simply because it excludes, alienates, and sometimes rejects the experiences of transgender and gender-nonconforming people. Either way, some nail artists have tried to turn "vagina nails" into a feminist statement, while others just think it's a way to get creative and have fun.

As for the internet, it has mixed feelings on this trend:

Instagram user, darcysilveriranailartist, asked "Why though..." in response to the "vulva" adorned nails while another user, videogamelizard, described one set of "vagina nails" as "nail goaaals."

Obviously, it makes sense that people had varying opinions on the trend. Conceptual art, or anything that is designed to shock people, is going to get a huge wave of attention. Although this "vagina nail" trend is undoubtedly creative, it's crucial that we avoid equating vaginas with feminism. It's fine to wear "vaginas" on your nails for fun, and if you have a vagina, by all means, be proud of it. And, for some people, their feminism is derived from the experiences they've had in their body. But that idea — that your experiences inside you're own body can define your feminism — shouldn't be restricted to only those with vaginas.

The nail artists behind "vagina nails" are not engaging in these sorts trans-exclusionary generalizations, so let's make sure we, as art viewers and interpreters, do the same.