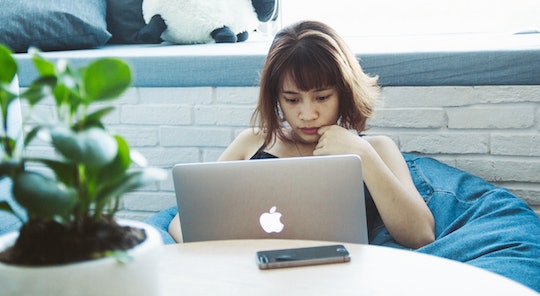 This Doctor Has A Solution To The Self-Induced Abortion Trend

One of Google's most recent search trends isn't just disturbing — it's unsafe. A spike in searches shows that women's health care resources are scarce, and, rather than giving up, women are turning to self-medicating instead. According to the report, women are using Google to research self-induced abortions — luckily, one doctor has a much better solution.

Google researcher Seth Stephens-Davidowitz told Vox that he's "convinced that the United States has a self-induced abortion crisis" due to "how frequently people are searching for ways to do abortions themselves." When abortion access is restricted, the numbers climb. What's more, the "searches are concentrated in parts of the country where it's hard to get an abortion." Given the secrecy and stigma surrounding them, it's nearly impossible to estimate the frequency of self-induced abortions. Thus, private Google searches are really the only hint as to what's actually going on.

Dr. Daniel Grossman, one of the nation’s leading reproductive health researchers is focused specifically on self-induced abortion in Texas. Grossman insists that over-the-counter medical abortion could be the safest solution. "It no longer makes sense to demonize women’s safe use of abortion medications at home," he wrote in an opinion piece for The Guardian, "just as the abortion rights movement should no longer rely on rhetoric around returning to the days of coat-hanger abortions."

So what does self-medicated abortion look like in the year 2017? Grossman notes that medications and herbs are common, with inconsistent safety and effectiveness across the board. But there's a much better solution: Over-the-counter abortion medication can be more than 95 percent effective. The medication is meant for pregnancies at 10 weeks gestation and earlier, and combines two medications. Grossman's now hoping to get the drugs approved by the U.S. Food and Drug Administration (FDA), but still admits that it might be quite a while before the medications hit the shelves.

"Of course, at the moment, the idea of over-the-counter access to medication abortion in the United States sounds crazy," he wrote. "Currently American women in most states – unlike women in many other countries – are unable to buy even birth control pills without a prescription."

It may be a long time before these drugs are on the shelf of your neighborhood pharmacy, but in the meantime, there are other ways to improve access to this technology and help women obtain abortion care earlier in pregnancy.

Research has already demonstrated the safety of nurse practitioners providing medication abortion, as well as the use of telemedicine to expand access to this option. While we wait for more data on over-the-counter medication abortion, the time has come to start loosening restrictions on this abortion method and to help give women the type of care they want.

For now, women must go through a medical facility to obtain any sort of procedure or health service. But if Grossman and those who think the way he does have their way, things might get a whole lot more streamlined very soon — and that's good news for everyone.

More Like This
Parents Are Missing Work At Record-Breaking Rates To Take Care Of Sick Kids
Why Do Toddlers Line Up Toys? Experts Explain This Classic Toddler Behavior
Yes, It’s Possible To Get Pregnant If You Have An IUD
Is It Good For Babies To Be Exposed To Germs? It’s Complicated