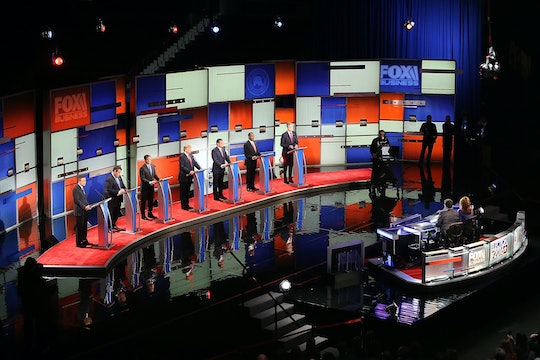 Another day, another primary debate, and once again — to no one's surprise — half of the country's population was relatively ignored. While the Republican Party has struggled to connect with women in the past, at this week's GOP debate women were largely ignored. Worse still, the few times women were even mentioned it was either in jest or in a passing comment meant to question the policies of rival Democrats.

On the whole, the evening wasn't totally bad for women: Earlier on Thursday, at the highly-panned undercard debate, pundits and conservatives alike agreed that former HP CEO Carly Fiorina had singlehandedly won the night, laying waste to both her Democratic and Republican rivals with one-liners and biting critiques. The problem? Many of Fiorina's attacks were blatantly sexist in nature.

"I’m not a political insider — I haven’t spent my lifetime running for office," Fiorina remarked, before taking an indirect dig at Democratic front-runner Hillary Clinton. "The truth is I have been blessed by a lot of opportunities to do a lot of things in my life. And unlike another woman in this race, I actually love spending time with my husband." Paired with her not-so-subtle swipe at Republican front-runner Donald Trump (whom Fiorina called the "Kim Kardashian of American politics"), Fiorina's win could hardly be considered a victory for women at all.

Things only devolved from there. At the mainstage Fox Business debate later in the evening, women were only mentioned a handful of times, and never in important discussions. At one point, while attempting to take down New Jersey Gov. Chris Christie, Florida Sen. Marco Rubio nonchalantly mentioned that military funding was more important than funding places like Planned Parenthood which offered women's health services — a good tagline to be sure, and one that would likely earn him accolades among his donor base, but discouraging for female voters to say the least.

Earlier in the debate, Trump, perhaps hoping for another boost in the polls, scraped together a haphazard answer when asked about Syrian refugees, insinuating that there were few women crossing borders and obscurely remarking,

When I look at the migration, I looked at the line, I said it actually on your show recently, where are the women? It looked like very few women. Very few children. Strong, powerful men, young — and people are looking at that and they're saying what's going on?

... And that was all she wrote. Aside from a stray, uncomfortable slip-up by second place candidate Ted Cruz early in the evening (Cruz, commenting on the recent return of 10 American sailors from Iran, awkwardly noted that, if elected president, "no service man or service woman [would] be forced to be on their knees"), women's rights and the issues that mattered to them flew completely under the radar. For all intents and purposes, the sixth GOP showdown could have been aptly subtitled "men only", and no one would have noticed the difference.

If Republicans are hoping to win a larger percentage of the women's vote in the coming months, perhaps they should turn their focus on unifying the female electorate under a common banner, rather than dismissing any notion that they might exist at all.