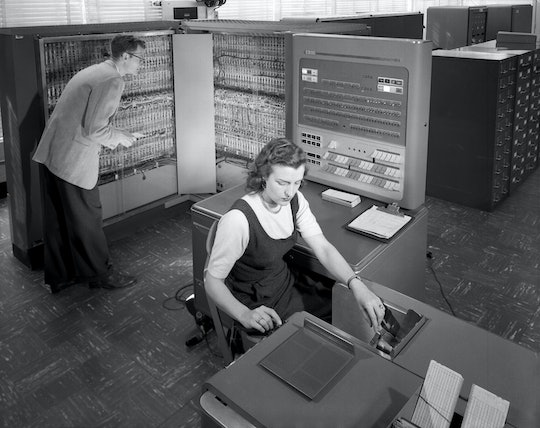 NASA's astronaut class of 2013 made history for one specific reason: half of the accepted applicants were female. They were celebrated online, with the news featured in magazines from The Smithsonian to Marie Claire. Now, just a few months later, there's a new book on the market that takes a retrospective look at women's contributions to space travel, called Rise of the Rocket Girls. The women behind the space program are finally getting the recognition they deserve, and that's a huge win for girls everywhere. Oh, and it's also a fascinating story.

Author Nathalia Holt spoke to National Geographic recently about her newly released book and the amazing women featured in it. The women at NASA's Jet Propulsion Lab (JPL) were "computers" who did the math that got male astronauts to the moon. "Even in the 1960s, calculations for most NASA missions were done by hand, using paper and pencil," Holt told National Geographic. Those calculations were often done by women at the all-female JPL lab, Holt said, and their contribution can be seen in the Voyager mission, the first spacecraft to have reached Neptune (and then continue past it). Holt said:

Voyager is the pinnacle of these women’s careers. The original Voyager mission was curtailed due to budget cuts, so these women worked in secret, behind closed doors, trying to figure out the best trajectory for the Voyagers. If they hadn’t done so, the mission would have ended at Saturn instead of exploring the entire solar system. Their legacy is, quite literally, inside those memory banks. And Voyager is now carrying that legacy to the stars.

The interest in women's contributions to space travel don't end with Rise of the Rocket Girls: The Women Who Propelled Us, from Missiles to the Moon to Mars, either. In September, Hidden Figures will be published, a book that zeroes in on African American women in space travel. (In 2017, Hidden Figures will play in theaters, too, and I'm looking forward to it even more than I did to The Imitation Game.) Most people don't know that Katherine Johnson, an African American woman, was the person who actually calculated the trajectory that took NASA to the moon for the first time.

You might be thinking, Hey, this is great and all, but what does it matter? Haven't we already achieved a gender-equal astronaut class? Aren't we set? Unfortunately, not really. According to Holt, the number of women in STEM has actually dropped. "In 1984, 37 percent of degrees in computer science were awarded to women," she told National Geographic. Today, that number has plummeted to 18 percent." Holt attributes JPL's success to the fact that the lab was 100 percent female, thanks to the hiring practices of one of its first managers:

Having this all-female team made a big difference. This is also rooted in research that we have now. There is more sexism in industries that are typically male-dominated and this can be alleviated by having more gender balance.

Not only do these recent stories give women the recognition they were denied for years, it also inspires a new generation of young girls. In 2012, an MIT study found that people really do need gender-specific role models: In Indian villages where a woman was the politician in charge, the gender gap completely disappeared in education, and both girls and their parents had higher expectations for their future. Seeing women own it in specific fields is incredibly important in helping younger women realize that they can do the same thing.

An important thing to note in that MIT study is that those female politicians only came into play when a gender quota was implemented — raising the number of females in local government from 5 percent to over 40 percent. In male-dominated fields, a gender quota isn't a bad idea, especially since it can cut down on the sexism prevalent in those fields.

In the meantime, those stories about badass women in hugely respected fields? Keep them coming, because women need their own Neil Armstrong, too.