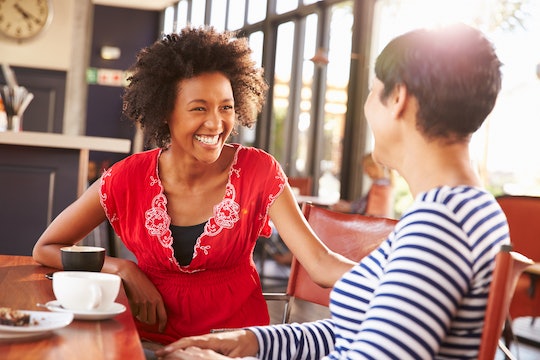 Discussing Sex With Your Friends Might Be Good For Your Well-Being, Study Finds

Sex is something that people are often taught to tiptoe around. You might be hesitant to start talking about sex with your friends, but it may actually do far more good than harm. According to a new study, women discussing sex with their friends is associated with increased sexual health and well-being. It's clear that, even for topics that can be uncomfortable, there's power in conversation.

For some people, discussing their sex lives with their friends isn't new. In 2014, a survey by Match found that 57 percent of single women talk about their sex lives with their friends — more than reported speaking to their partners about it. If you haven't done it before, though, it can be nerve-wracking to figure out what to share and how much information is too much. And why even bother talking about it at all? As outlined by Health, these conversations help open the door for busting some myths and working through any anxieties or other bigger issues.

Women, in particular, are taught to be quieter about sex. Society also routinely fails to teach women about sexual health. Having conversations with friends is one way to push back against shame.

A new study in the International Journal of Sexual Health decided to look into how women discussing sex tied into their overall well-being. "Communication about sex is an important variable in sexual well-being, but sex remains a taboo topic, particularly for women," the study author noted in their abstract.

For the study, researchers worked by surveying 617 women from the United States about their sex life and communication with friends, as outlined by the study's abstract. Researchers noted a few key things.

They also found that, when women had supportive female friends who offered positive or encouraging remarks, they were more likely to ask a partner to change something about their sex life or if they've been tested for an STD, as outlined by PsyPost.

The study did note that discussing sex with friends can promote "skewed norms" around sex or otherwise inaccurate information. However, that's less to blame on having conversations and has more to do with lack of education to start.

"Sometimes when we talk a lot about sex we educate each other, help problem-solve, etc., but we might also increase pressure and skew norms about sex. So it’s not just that we need to communicate more, it’s that we also need to communicate better," Katrina Pariera, lead author of the study, said, according to PsyPost.

When it comes to discussing sex, there are some boundaries that should be followed, as outlined by Lifehacker. One basic rule to follow is that, before sharing anything, you ask yourself if you'd be okay with your partner sharing the same details with their friends.

There's a lot of power in women learning more about sex and discussing it with friends. Doing so can help end stigma and promote increased sexual health overall.