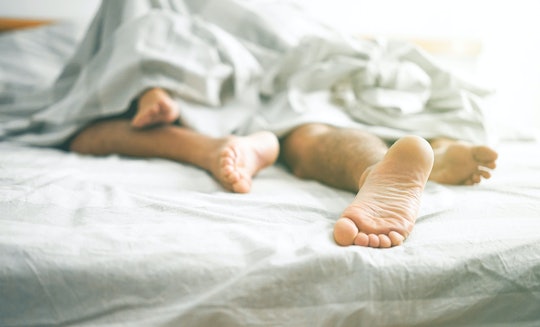 It's no secret that becoming a parent is completely life-altering, and the difficult reality is that you don't always know just how different things will be until your child actually arrives (at which point, uh, it's kind of too late to back out). But if stereotypes about motherhood have left you worried that giving birth will ruin your body, relationship, and your ability to ever get a good night's sleep again, the good news is that only the last one seems to be inevitable. Because it turns out that women enjoy postpartum sex, and that's a pretty refreshing thing to hear given that we're usually told to expect our post-baby sex lives to majorly suffer.

Pregnancy and childbirth can definitely do a number on women's bodies, and it can take a long time to recover. Add to that the steep learning curve involved in having a newborn, coupled with some intense sleep-deprivation, and it's no surprise that the early days of parenthood can feel rough. But while it can be nerve-wracking to hop back into the sack after you've birthed a tiny human, a recent study conducted by Peanut, a social networking site for moms, has found that there may not be any reason to be worried. The findings, released Tuesday, looked at sex lives of millennial moms, and the results were pretty eye-opening.

For one? The study found that, at least among millennials moms, motherhood definitely isn't the libido-killer it's often portrayed as. Peanut quizzed 1,000 women with children between the ages of 22 and 27, and found that, actually, we still think about — and have — sex quite often. Over half of millennial moms, for example, said that "they think about sex often or very often," and 61 percent of women said they actually wanted to have *more* sex than they were currently having. To quantify that idea, Peanut also asked how often millennial mamas were doing it, and the answers were pretty impressive: nearly three-quarters of those surveyed reported having sex at least once a week, with most (almost 30 percent) getting busy two to three times per week.

Perhaps the most encouraging news to come from the study's findings though? Not only are millennial moms having lots of sex, the majority are liking it just as much as pre-baby sex, if not more. A whopping 72.9 percent of women told Peanut that, in general, they enjoy postpartum sex, and 21.9 percent said that, actually, postpartum sex is *even better* than it was before.

Of course, as encouraging as that information is, it definitely doesn't mean there is anything wrong with women who are hesitant to have sex again after giving birth. And regardless of percentages, all that really matters, after all, is how you and your partner feel specifically. In general, Live Science noted that, statistically, most couples start feeling the urge to be intimate again within about three or four weeks following delivery, and that most will actually start having sex again about seven or eight weeks postpartum.

But there's certainly a lot that can affect that timeline: firstly, most doctors will recommend waiting at least four to six weeks before having sex again, according to the Mayo Clinic. Individual physical healing can take longer however, depending on factors like delivery method, vaginal tears, dryness, and countless other physical changes that childbirth and hormonal fluctuations can cause.

Then, there's the psychological element. If you're tired, in pain, experiencing a low libido due to hormonal changes, or grappling with postpartum depression or anxiety, it's not exactly shocking to think you might need more time. And the connection you feel with your partner also plays a huge role: according to Live Science, "feelings of intimacy and closeness" with their partner has been shown to be the biggest driver of sexual desire among postpartum women.

Add that all together, and it makes sense that, according to Peanut, 61.8 percent of moms said they felt nervous or afraid to have sex for the first time after giving birth. But given that most women also said they were satisfied with their post-baby sex lives? It sounds like it definitely all worked out in the end.

Having a baby is a huge adjustment, and it is also a lot of work. But what the Peanut study suggests, is that, of all the things there are to worry about as a new parent, your eventual postpartum sex life doesn't have to be one. So the next time you're awake at 2 a.m. with a crying infant? Looking forward to all that really great sex in your future can be a way to make it through.

This article was originally published on Sep. 24, 2018