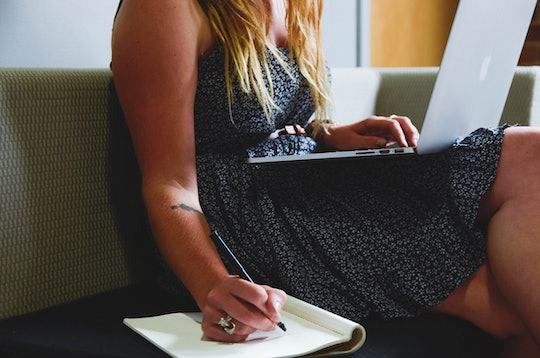 Like many moms of daughters, I'd like to think that I could raise my little girl to follow her dreams, to know she can do whatever she'd like with her life, and that she is deserving of the same rights as anyone else (because she is). But at a time where a man who has bragged about grabbing women without their consent is less than a month away from being sworn in as the President of the United States, and when Congress has vowed to fully defund Planned Parenthood, the notion of gender equality is a pretty hard sell. Now, according to New York Magazine, a recent study published in the American Sociological Review has found that women face a "motherhood penalty" in the workplace even if they don't have children yet, based on the notion that they could one day leave to raise them. Sigh.

The idea that children have a negative impact on women's earning potential is certainly not new, surprising, or even particularly difficult to understand (especially if, uh, you're a mother). Raising children is demanding, and even though fathers generally take on much more responsibility now than in years passed, women still shoulder much of that extra work — to the detriment of their own careers.

According to The New York Times, women's earnings generally tend to decrease, on average, by about 4 percent for each child they have. That's frustrating for many reasons, not the least of which being that children are a pretty significant financial commitment that requires more money, not less. But studies have shown that, when it comes to applying for jobs, men are largely considered by employers to be more desirable applicants than women when qualifications and experience are equal, and that childless women fare better in the job market than mothers. And when they are actually hired? Mothers are offered about $13,000 less on average than fathers to do the same job, and would be more likely to be held "to harsher performance standards" by their bosses.

That's bad news for mothers of course, but now studies are finding the motherhood penalty can affect childless women, too. In the American Sociological Review study, researchers looked at the way that elite employers — in this case, top law firms hiring law students for highly-competitive summer internships — tend to favor applicants whose resumes suggest they are from higher-class backgrounds, according to the Harvard Business Review. They sent out fake resumes representing applicants with the exact same (impressive) qualifications, except with some very important differences: the resumes were assigned either a male or female first name, and some had details that signaled the applicant was more likely to be of a higher social class (think "sailing" and "polo" as personal interests, vs. "track and field" or "country music").

The researchers found that not only did the higher-class male applicants do better, they did significantly better: the imaginary male polo-playing law student received four times as many callbacks and interview invitations than all of the other applicants combined. And that was true even compared to the imaginary female polo-playing law student, whose resume was exactly the same as the man's, except for the first name.

Why the disparity? According to the Harvard Business Review, even higher-class women are viewed by employers as more likely to leave their jobs when they have children, negating any benefit that might have come as a result of the bias in favor of their social standing. As one female attorney explained,

The perception [of hiring managers is] ... that higher-class women do not need a job because they 'have enough money,' are 'married to somebody rich,' or are 'going to end up being a helicopter mom.'

In other words, even if a female applicant checks all the (already biased and unfair) boxes — she's highly qualified, comes from a well-to-do background, and doesn't have kids — it's assumed she won't bother to stick around if and when she does.

Of course, the law internship study isn't representative of all careers, so it can't just be automatically assume that women are always expected to be less committed based on the fact that they could have kids one day. But barring further research, it definitely seems like it wouldn't be an unreasonable thought. Even though data from the Pew Research Center shows that women are now "the sole or primary breadwinner in 40 percent of households with children," and even though there are also plenty of women who choose to not have children, the idea remains that, as employees, mothers aren't considered ideal.

And the reality is that lots of women do also choose not to return to work after having children, for a variety of reasons (one of which being that the high cost of childcare can make returning to work seem less worthwhile if one partner's income is enough to support the family).

Lisa Maatz, policy adviser with the American Association of University Women, spoke to NBC News about the bias against women in the workplace, and explained how outdated notions of gender are behind it. Maatz said,

This kind of discrimination is institutionalized. It's a part of the culture, it's a part of the decision-making process. Right now the assumptions about women's roles, as stereotypical as they may be, are driving decisions and those decisions disadvantage women.

This is all grim news for women, but what about men? Research, unsurprisingly, shows that they've generally got it pretty good — even if they intend to become dads, or are dads already. Not only is there no "fatherhood penalty," but, according to Business Insider, men actually see increases in their earning potential once they have children, so long as they live with them. In her research, University of Massachusetts, Amherst sociology professor Michelle Budig found that, on average, men earn more than 6 percent more after they have children, especially if they're white, college-educated, and already earn a good salary to begin with. The exception? Black fathers, who statistically see no increase in their salary at all in relation to having children, even if they are also college-educated and earning well, according to Business Insider.

None of this is necessarily completely new or surprising, and many women today have grappled with the feeling that they need to hide their pregnancies for as long as possible at work, or postpone them all together for fear of being treated differently or losing out on coveted projects or promotions. But having data to back it up is certainly helpful. Even though many women are seeing great success in their careers, both with children and without, it's clear that there is a long way to go before being female stops being a disadvantage, especially in the workplace.