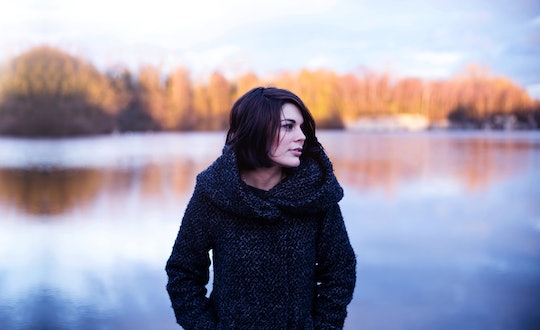 Everyone take a big, deep breath. Does it ever feel like you have more anxiety than your male peers or partner? It's not just you. A new study from the University of Cambridge found that women tend to have more anxiety than men — and there are plenty of reasons why that may be true. The Cambridge researchers reportedly carried out a systematic review of 48 studies where populations had reported anxiety and found that overall, more women showed and reported symptoms of anxiety than their male counterparts. Overall, 4 percent of the world's population has anxiety disorders and in North America the rate is as high as around 8 in 100 people, meaning that we're even more prone.

According to the researchers, anxiety was defined in this sense as excessive worry, fear, and a tendency to avoid stressful situation. Women generally report twice as much anxiety as men and it's more common overall for people under the age of 35 (that sounds about right, huh?).

In the Cambridge study specifically, the team found that pregnant women and caregivers reported high levels of anxiety. Pregnant women in particular also exhibited symptoms of obsessive compulsive disorder during and right after pregnancy more than any other population group. So if you feel like sometimes you're losing it, there's science to back it up.

"Anxiety disorders can make life extremely difficult for some people and it is important for our health services to understand how common they are and which groups of people are at greatest risk," first author Olivia Remes, of Cambridge's Department of Public Health and Primary Care said in the study, which was published Tuesday. "By collecting all these data together, we see that these disorders are common across all groups, but women and young people are disproportionately affected."

Of course, there are many reasons that young women and mothers suffer from anxiety more than men.

Although we're living in a world where it's more common to divvy up parenting and housework, it's not always a perfect split. Stereotypical, old fashioned gender roles do prevail. Even if a stay-at-home mom (or dad) does it out of choice, it's still unpaid and sometimes thankless work. Taking care of children at home all day, or working and then coming home to a load of housework is hard and it can take a toll on a parent's mental health.

In addition, single mothers and women living in poverty tend to experience to higher rates of anxiety. New parents are also sleeping less, which makes managing emotions and stress all the more difficult.

Male and female brains are different. While there is debate about whether the corpus callosum is actually bigger in female brains (leading to women processing more information all the time), our brains do function differently. It's possible that women are predicting and calculating risks more often than men do, which would lead to more anxiety. Also, the fluctuations of our hormones can lead to more "emotional sensitivity." That doesn't mean we're wimps, just that there are times when we feel emotions more "acutely," according to Glamour, leading to more anxiety.

We Talk About Anxiety More

While hormones, taking care of children, or being a single mom, and lack of sleep are all valid reasons that women might have twice as much anxiety as men, it's also possible that females are just reporting it more. This new study was a review of other studies, where female and male subjects were reporting anxiety symptoms. That being said, it's likely that men are also less prone to report mental health issues. Gender roles work both ways — traditional ideas of "masculinity"can lead to men bottling things up. As the American Psychological Association puts it, "the Marlboro man wouldn't have to ask for help."

So what can you do? First, relax, because you're totally normal. Then, talk to someone about how you're feeling (and get that too-proud dad to talk to you). Managing anxiety can be difficult, but its not impossible, and you don't want to walk around wringing your hands with worry and stress all the time. Especially because anxious parents tend to raise anxious kids (take it from me and my mother). Also, sleep. Ha, just kidding, that's probably impossible. But it's worth a shot.

More Like This
Doctors Swallowed LEGOS To Prove Everything Is Awesome For Kids Who Do The Same
Does The FDA's Plan To Limit Lead In Baby Food Go Far Enough?
Why Your Vagina May Be Itchy After Sex & What To Do About It
Why Is My Discharge Brown? Experts Explain
What Parents Are Talking About — Delivered Straight To Your Inbox