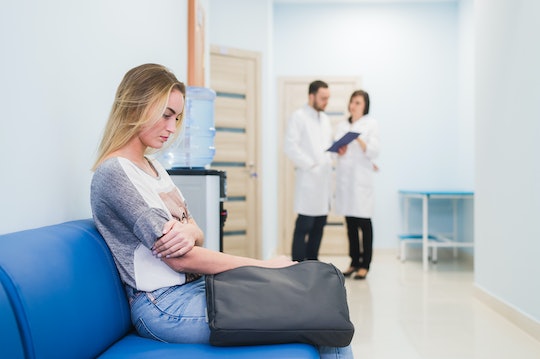 Women In Arizona Now Have To Justify Their Abortions To Lawmakers, & It's So Wrong

People who have abortions do so for different reasons. And those reasons are nobody's business but their own. Talk to anti-abortion politicians in Arizona, though, and they'll disagree wholeheartedly. In their view, if you choose to have an abortion, the state ought to know why. Now, thanks to a new state law, women in Arizona will have to justify their abortions to lawmakers. Because burdening the state health department with unnecessary paperwork is a really smart use of available resources and funding.

On Saturday, Arizona Gov. Doug Ducey, an anti-abortion conservative, quietly signed Senate Bill 1394, a contentious measure expanding abortion reporting requirements in the state, according to Rewire News. Under the new law, people seeking abortion care will now have to answer a questionnaire about why they want the procedure. They would have to explain whether the decision is of their volition, or due to rape, incest, domestic violence, sex trafficking, coercion, or concern for their health or the health of the fetus, Rewire News reported.

That's in addition to existing state law that requires doctors to ask clients about their past miscarriages and prior abortions, in addition to demographic questions about martial status and education, among others, Rewire News reported. What's more: Abortion providers must report all of this personal information to the state government.

Conservative lawmakers in Arizona have touted SB 1394 as necessary to "protect women's health" — the standard justification given for any anti-abortion measure that's introduced. But abortion rights advocates say the law is an invasion of privacy, according to ThinkProgress, and will serve as another barrier to reproductive care.

This bill is a blatant attempt to invade people’s privacy and to shame and judge women who make the decision to end a pregnancy. This is another case of politicians trying to take away our rights and control our bodies, and women will not stand for it.

What Ducey signed into law this past weekend is actually a toned down version of SB 1394. The original version of the legislation also included questions on whether the person is seeking an abortion because they cannot afford to or do not want to raise a child, ThinkProgress reported. Those questions, though, were removed by the Arizona House of Representatives before the legislation headed to the state Senate.

The Senate passed SB 1394 on Wednesday in a 17-13 vote, largely along party lines, according to The Daily Courier. The anti-abortion lobbying group Center for Arizona Policy, which is responsible for dozens of model legislation restricting abortions, had drafted the measure, The Daily Courier reported.

Advocates say SB 1394 will do nothing but shame people seeking abortions, and could cause them to delay or forego care. Medical experts have also criticized the controversial measure, with the American Congress of Obstetricians and Gynecologists, Arizona Medical Association, Arizona Public Health Association, and Arizona Chapter of the American Academy of Pediatrics all rejecting the bill, according to Rewire News.

It’s no wonder Gov. Ducey signed this intrusive law behind closed doors. SB 1394 is a bill that proponents claim is about women’s health and safety. Let’s be clear: This law, along with the dozens of other laws passed in recent years, will not improve the lives or health care for people who need it in the state. No mainstream medical organization supports this bill.

But Arizona is not the only state to enact such an intrusive law related to abortion. Indiana Gov. Eric Holcomb signed a similar bill into law last month that requires health care providers to report abortion complications to the state each year, according to The Indianapolis Star. And that includes doctors who don't work in abortion clinics.

The legislation, known as Senate Enrolled Act 340, lists 26 "complications" that doctors would have to report, including cardiac arrest, infection, and psychological or emotional issues, The Indianapolis Star reported. But a landmark study by the National Academies of Sciences, Engineering and Medicine found that abortions, the majority of which happen in the first 12 weeks of gestation, are extremely safe with few complications.

In the end, SB 1394 and SEA 340 are two unnecessary pieces of legislation further restricting abortion by making the process more complicated and burdensome. If conservative lawmakers are really that concerned about protecting life, there are thousands of kids in Flint, Michigan who need help.