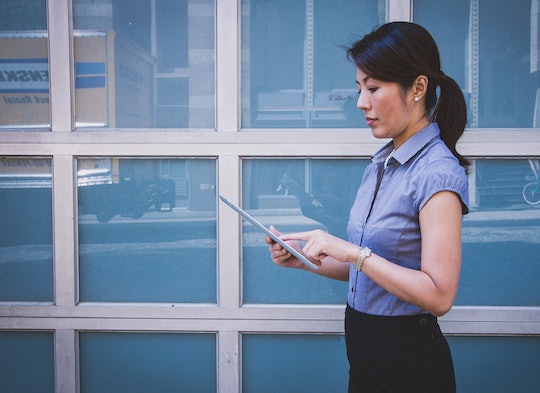 Why Some Women In Leadership Aren't As Happy As Men

As most women are already aware, sexism sucks. It's been suggested that sexism played a larger role in the 2016 presidential election than most would like to admit, and the wage gap is still a real, terrifying thing. Sexism has many forms, and many consequences, too: Along with the wage gap, there's a disappointingly low amount of women in leadership positions across the United States, with only 5 percent of women in CEO positions at Fortune 500 companies. But, unfortunately, even if a woman does get to the top, there will likely still be problems. As a new study shows, women in leadership positions are often less happy than men, and, unsurprisingly, sexism may be to blame in many instances.

In a paper published in the Journal of Happiness Studies, entitled "Why Managerial Women are Less Happy Than Managerial Men," authors Hilke Brockmann, Anne-Maren Koch, Adele Diederich, and Christofer Edling explored why successful women in leadership positions may be less happy than their male counterparts. As an essay about the new research in Scientific American suggests, when women get promoted to leadership positions, they often "expect to make more tradeoffs between life and work in high level positions" — tradeoffs that many men don't even recognize, and will never have to make for themselves.

As many working women know, the more time that is being put into a career, the less time a woman has in her own personal life (though to some, a more limited social life is totally OK). Society still expects many of these women to balance things like dating, marriage, children, and family time with their increasingly heavy workload, again, something their male counterparts aren't expected to do, at least not to the same extent. The unfair pressure to "have it all," as they say, is real. As New York Magazine's The Cut puts it,

If you’re a young professional women in 2017, for example, there’s a pretty good chance you’ll not only be expected to do the “traditional” womanly stuff — the emotional labor and motherhood and relationship maintenance — but also to strive to climb the ladder at your organization.

Indeed, the pressures of succeeding at work can be stifling for women. But the self satisfaction that comes with a new, leadership position is often clouded by the anxiety that, to some extent, that promotion comes with the sacrifice of a personal life.

Compounding the issue, there is also a ridiculous amount of pressure for women to be perfect, in both their professional and personal lives. The anxiety of being successful at work, and being an awesome mom or wife can mean women don't find the same joy in their successes as men do.

Sexism has created a world in which a woman can work her entire life to finally be promoted to a leadership position, but will still face unrealistic expectations, simply because she is a woman. Because of this, "Women may consciously decide not to climb the organizational ladder even when they are well qualified," Scientific American pointed out, and the sexist cycle and lack of female leadership will continue.