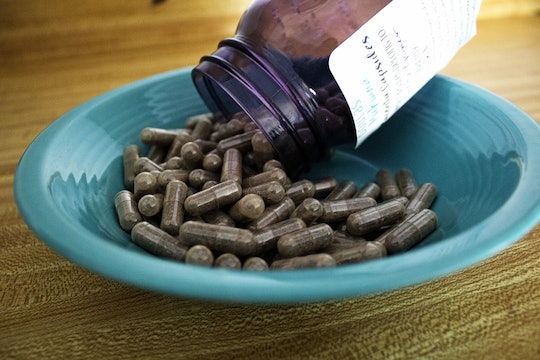 When you're expecting your first baby, the amount of conflicting information on pregnancy, childbirth, and parenting out there can be overwhelming. Should you breastfeed or use formula? Co-sleep or not? So many choices are fraught with controversy, but there's one decision that's now easier to make than ever, because there's even more evidence that women shouldn't be eating their placentas, in any form. It's true that many other mammals do so, but whether you're blending it into a smoothie or popping freeze-dried pills, placentophagy offers no benefits to humans, and it can actually be extremely dangerous for both mother and child.

It's easy to see how women can be confused about the risks and benefits of eating placenta. Celebrity moms proudly share photos of their encapsulated placenta on Instagram, touting their purported benefits. And it's not just Real Housewives and Kardashians who were suckered into the trend; even Mayim Bialik, an actual neuroscientist, and Samantha Bee, celebrated Nasty Woman, believe that digesting their own medical waste has health benefits, according to Us Weekly. Google "placenta encapsulation" and the first result that comes up is from the official-sounding American Pregnancy Association, which claims that the practice "appears to carry no inherent risk." But do a little digging, and you'll find that that the organization is actually a front for anti-choice crisis pregnancy centers, not a valid medical authority.

Even trusted voices like Parents magazine seem hesitant to take a stance on the issue; an article on its site admits that "there's no scientific proof that placentophagy works" and "no government agency oversees the certification of encapsulators," then directs readers to The Association of Placenta Preparation Arts, LLC, a website that claims that "studies have also shown" that ingesting placenta can prevent postpartum depression, slow postpartum bleeding, and increase hormone levels and milk production, without any citation.

The confusion surrounding the practice stems from the recent fetishization of all things "natural," which reasons that anything wild animals and ancient humans did must be inherently healthy. But the old ways aren't necessarily better; it wasn't until the mid-1800s that doctors even considered the notion that washing their hands before surgery might be beneficial (and the first one to propose this theory was laughed out of the medical profession and eventually committed to an asylum). Moreover, the idea that humans have been consuming their placenta for centuries is patently false; according to a 2013 University of Nevada, Las Vegas study, the first recorded incidence of the practice dates back to the early 1970s.

Now, there's more research by two of the same researchers from the 2013 paper, UNLV anthropology professor Daniel C. Benyshek, Ph.D., and Sharon M. Young, Ph.D., among others. A randomized, double-blind, placebo-controled study found no significant differences in postpartum maternal mood, bonding, or fatigue between mothers who consumed placenta pills and those given a placebo. Last year, the team conducted a similar study to investigate the claim that placenta encapsulation is a good source of iron, and likewise, no such benefit was found.

But don't just take their word for it. A Cornell study published in August also found "no scientific evidence of any clinical benefit of placentophagy among humans, and no placental nutrients and hormones are retained in sufficient amounts after placenta encapsulation to be potentially helpful to the mother postpartum." The paper also warned that the practice is potentially harmful, citing a Centers for Disease Control report outlining the case of an Oregon infant who ended up in the neonatal intensive care unit with sepsis twice before doctors discovered that he'd been infected by tainted breast milk carrying group B Streptococcus agalactiae from his mother's placenta pills. It's true that there's little research on placenta pills, but the research we do have is clear: it can be dangerous, and there are no health benefits whatsoever.