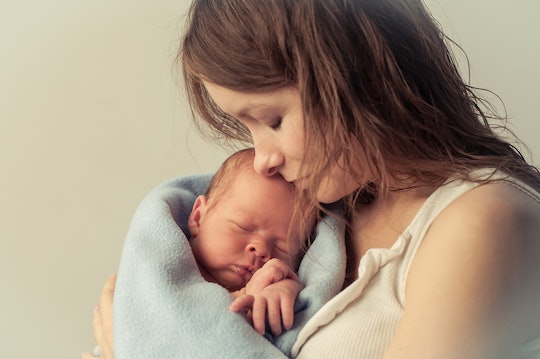 Giving Birth In These Months May Be Linked To Postpartum Depression, New Study Finds

As more information and awareness comes to light, it's even more clear how prevalent postpartum depression (PPD) is for so many new parents. In fact, one in seven women will experience PPD after giving birth, according to the American Psychological Association — and it stays with women, lasting for weeks or months after giving birth. PPD isn't something that can be magically cured or prevented, but new research might give some insight as to why some women get it and others do not. Most recently, one new study found that women who give birth in two specific seasons are less likely to suffer from PPD. It's not a cure by any means, but these new findings do provide a better understanding about PPD.

Women who give birth during the fall or summer months are more likely to suffer from postpartum depression, according to a press release of the findings published by Science Daily. And in turn, the study found that women who give birth during the winter and spring are less likely to suffer from postpartum depression. Yes, according to the research, giving birth anywhere between the months of May to November could be the reason some moms are feeling different and down after welcoming their baby.

The study suggests, according to Science Daily, that the lack of PPD in moms who deliver during the winter and spring can be attributed to the "seasonal enjoyment of indoor activities."

One of the study's lead researchers, Dr. Jie Zhou, who works at Brigham & Women's hospital in Boston told The Telegraph that they wanted to find out what factors influence a woman's risk of developing PPD. As the study found, giving birth during the holiday season has a positive influence on a new mom's outlook. Zhou told The Telegraph that sun exposure and vitamin D could also contribute to why some women get PPD in the summer and fall, rather than in the winter or spring.

Because new moms are surrounded by family members and positive images during the holidays in the winter, this could be why they're less likely to suffer from PPD. But, some people might find these findings to be a bit contradictory, especially considering seasonal affective disorder — a type of depression that comes and goes during the seasons — is much more common in the late fall and winter, according to the National Institute of Mental Health. But PPD and seasonal depression can strike at any time of the year.

Now, this study isn't calling on women to plan their pregnancies so they don't get PPD. But what this study can do is possibly help a new mom conclude that they have PPD, rather than just the baby blues — the least severe form of PPD, according to the American Pregnancy Association — especially if they have been denying the symptoms for too long.

Indeed, detecting PPD is so important for the health of a new mother. Up to 50 percent of women with postpartum depression will go undiagnosed, according to Postpartum Progress. The symptoms, according to the Mayo Clinic, can show themselves in different ways and be anything from excessive crying to difficulty bonding with the baby and severe mood swings. For some moms, treatment may involve finding support groups or talking to a therapist to help overcome PPD, according to the APA. And things such as medications and psychotherapy can be a viable solution to PPD as well.

Not only did this study link seasons with PPD, but researchers also observed the correlation between the baby's gestational age and the use of anesthesia during birth with PPD, according to Science Daily. The study was able to conclude that women who delivered their babies closer to their due dates were less likely to have PPD and women who did not have an epidural during pregnancy were more at risk to develop PPD, according to Science Daily.

The study, presented in front of the American Society of Anesthesiologists at the annual Anesthesiology meeting, according to Science Daily, surveyed more than 20,000 women.

With these new findings in mind, it can hopefully help women understand what they know about PPD and guide them to get treatment if they need it.