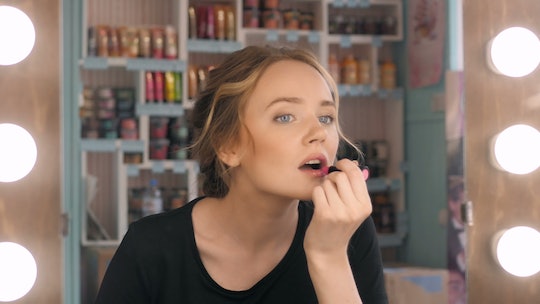 People Are Judging You Based On Your Makeup More Than You Think, Frustrating New Study Reveals

It's no secret that women have to put up with a lot of you-know-what to get through the day. Now, a new study found that there's one extra thing to think about when getting dressed in the morning and heading off to work. According to research done at Abertay University in Scotland by Dr. Christopher Watkins and published in the journal Perception, women who wear "heavy" makeup aren't seen as leaders in their work environments, which is just terrible.

The study participants looked at a selection of images of the same woman wearing either no makeup at all or makeup put on "for a social night out," Each participant would look at the 16 pairs of women with these varying amounts of makeup and then complete a "face perception task," in which they had to judge how much better of a leader they thought the women would be after comparing the faces.

Oddly, both men and women said that the women who were wearing heavier makeup would be worse leaders than those with less makeup on, according to the study's findings. Really, women can never seem to win. Wearing makeup has literally nothing to do with leadership skills, but for some reason, women are all socialized to judge another based on whether she likes to wear eye makeup to work or not.

Watkins said in a press release issued to Eureka Alerts that the results surprised him. "This research follows previous work in this area, which suggests that wearing makeup enhances how dominant a woman looks," he said. Watkins added:

While the previous findings suggest that we are inclined to show some deference to a woman with a good looking face, our new research suggests that makeup does not enhance a woman's dominance by benefitting how we evaluate her in a leadership role.

It's apparently all about finding some balance, judging by other research. Too much makeup will make people assume you're not a serious leader, but too little can hurt your career and even cause you to miss promotions. A 2016 study from the University of Chicago, according to TIME, found that better groomed women earned more money than their lesser groomed peers. In that study, researchers asked both men and women to judge people based on their appearances.

They found that "very attractive" men and women earned 22 percent more than people who were rated only "average attractive," according to The Washington Post. Here's the rub: For women, attractiveness was the result of styling — like having their hair and makeup look done — but for men, there was basically no difference when it came to grooming. (Also, women in the study categorically earned less than the men, no matter how their hair was styled or their makeup was done, because of course.)

A similar 2016 study from Harvard University likewise found that a woman is more likely to get promoted if she's wearing makeup, as The New York Times reported. Another 2013 study found that employers are less likely to hire a woman if she's not wearing any makeup and that if it was a "public facing" position, like sales or something, they would disproportionately discriminate against a woman for not having her face done, according to The Telegraph.

Which is frustrating, since not all women love to wear makeup. It's silly that before a job interview you should have to contour your face even if you don't ever do so just to make a certain kind of impression on a potential employer. It's asking some women to pretend to be something they're not. It's also an huge amount of pressure — really, how are women supposed to know what some people consider too much or not enough makeup? It's totally wack.

Hopefully, more employers will remember that a woman shouldn't be judged solely on her appearance when she's interviewing. Her skills, talents, and attitude are what will make her the right person for whatever job she wants. Not how much lipliner she likes to wear.