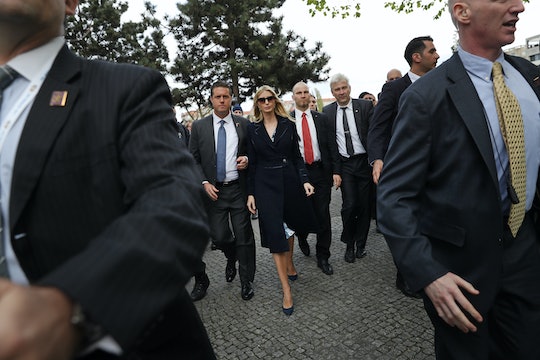 'Women Who Work' Gives Insight Into The Trump White House

During Donald Trump's campaign, Ivanka Trump stood by her father's side, and even described him as "gender neutral" in her speech at the Republican National Convention, despite vocal criticism to the contrary. She made it her mission to promote supposedly "woman-friendly" policies and childcare directives. Despite all this, and the contents of her latest book, Women Who Work: Rewriting the Rules for Success, any efforts for women's rights that she's made since taking an advisory position in her father's White House have fallen flat. But while the book might not be able to help women specifically, the myriad Women Who Work quotes about President Trump certainly serve as a sneak peek at the inner workings of the Trump mindset in general — promising, given that, by extension, those thoughts may eventually manifest themselves in the form of government policies.

Pegged as a guide to empower women to "create the life you want to live," Women Who Work certainly has its problems. Issues of privilege, a lack of intersectional feminism, and more have caused Ivanka's latest book to receive healthy amounts of harsh criticism.

Without diminishing those reasonable critiques, there are some important takeaways from the book, including some insight into possible future Trump policies, as well as explanations for the actions President Trump has already made since taking office.

In describing how she seeks to create "solutions for modern women who are living full, multidimensional lives," Ivanka states a personal motto from her father. "My father has always said, if you love what you do, and work really really hard, you will succeed," she explained. "This is a fundamental principal of creating and perpetuating a culture of success, and also a guiding light for me personally."

From this little peek into Trump's mind, we can glean that he does not have a quitting attitude. And while he may have thought the presidency "would be easier," Trump has shown no signs of giving up on pet projects like repealing the Affordable Care Act (a move both parties have condemned for myriad reasons); building a southern border wall (also condemned by both parties); and deporting immigrants from predominantly Muslim countries. If his motto in his daughter's book is any indication, Trump likely will do whatever it takes to accomplish those things, or at least make it appear as though he has.

On The People President Trump Hires

In deciding on her first job after graduating, Ivanka tells a story of a job offer from Anna Wintour herself, and how she turned it down to eventually be able to work with her father. However this wasn't without some precaution from her dad.

"I worried that he doubted my abilities as a developer," she explains, saying that her father actually told her to consider the job from Wintour instead of getting in to real estate with him (though he eventually did bring her on board). This moment may help to serve as some explanation as to why Ivanka remains so infamously complicit in her father's dealings (does she feel that she owes him still?) However, this anecdote also shows that Trump values loyalty more than almost anything else. As with his cabinet, Trump did eventually hire on Ivanka to work with him, despite initial caution, perhaps because she was already familiar to him. And in his presidential dealings, he follows a similar pattern: Hire people you like, people you know, and people with whom you already have support and a connection — no matter what their skillset or qualifications.

While discussing how to be a successful career woman and about "staking your claim," Ivanka provides another piece of advice from her father. "My father always says, if you're going to be thinking anyway, you may as well be thinking big."

Clearly, "thinking big" is part of the Trump brand, to some extent. It would account for President Trump's frustration with Congress for not repealing Obamacare, and other measures. If Ivanka is correct that her dad likes to think big, it makes sense that he decided to run for president, even though many felt he was unqualified — and that he is aiming to make as much of an impact as he can, even if he doesn't have the skills or resources at hand to do so.

Of course, many claim that the Trump administration is allegedly guilty of nepotism (not quite true, since the rules for POTUS assert his family members may not be paid staffers, a rule both Ivanka and husband Jared Kushner follow). Either way, President Trump has made clear that he prefers to work with family. And his daughter's new book only proves that to be true.

"I work hard to identify and foster talent from within; it's one of my father's greatest gifts as a leader, and, by example, one he taught to me," she writes. Of course, recruiting from the inside of a company isn't necessarily a bad thing, but when you're the President of the United States, it skirts the line a little too closely. Trump's cabinet is filled with Wall Street tycoons, and his advisers are some of his biggest supporters and members of his family. It wouldn't be surprising if he continues down this road in the future.

How Trump Makes Up His Mind

Ivanka explains in the book what she has learned from her father on the subject of advice. "My dad is a great example of this," she begins. "He's certainly known for having very strong opinions; what's less known is how he forms them–by asking the people doing the work for their feedback."

And while a president who listens to the input of the people might seem like a positive thing, in Trump's case, it's not exactly black and white. Trump has done well in getting his followers to continue to support him by making the issues appear one-dimensional. He will listen to workers and take their advice from time to time, sure, but only when their needs and opinions best align with what he wants and is willing to do — or when the other party misunderstands the topic enough to simply just nod along and agree with him.

Ivanka's new book sheds an important light on how her father has functioned in business, and how he is functioning in the presidency. Despite the book's issues, which have been readily noted by critics everywhere, it has become an important point of reference on the Trump family dynamic — and perhaps the future of the Trump administration in general.