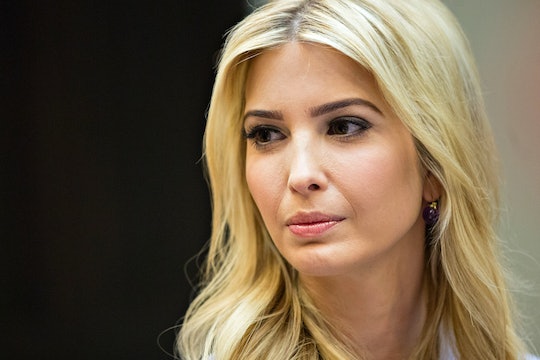 In her newest book, Women Who Work: Rewriting the Rules for Success, Ivanka Trump attempted to create an empowering guide for millennial working moms looking to get the most out of both their personal and professional lives. In theory, that may have been an admirable move, but once you actually read the book, one thing becomes almost immediately clear: Ivanka Trump might be a working mom, but she doesn't exactly have a whole lot in common with the rest of us. Trump's Women Who Work quotes about working motherhood seem to come from a sincere place, and there's no question that she really does seem to be trying her hardest to ensure that she can be both a successful businesswoman as well as an involved, dedicated wife and mother. But unless your life already happens to look a fair bit like hers, Trump's advice and guidance probably isn't going to resonate in any kind of meaningful way.

One major criticism of Trump's book is that, well, nothing she says in it is all that valuable. In fact, given how heavily she relies on quotes from other people, it often seems like she isn't really saying very much at all. In her review of the book for The New York Times, Jennifer Senior called Women Who Work "witlessly derivative, endlessly recapitulating the wisdom of other, canonical self-help and business books." And in addition to noting that reading the book "feels like eating scented cotton balls," NPR's Annalisa Quinn ultimately summarized Women Who Work as "a long simper of a book, full of advice so anodyne ... you could almost scramble the sentences and come out with something just as coherent."

That's not likely to be something that Trump herself will be happy to hear, but the reviews don't exactly miss the mark. And it may not even entirely be her fault, either. It's no secret that Trump grew up incredibly privileged — a fact she readily acknowledges three pages in, when she writes that "the doors that [her] family's name and [her] privileged upbringing have opened" have "undeniably" been a major factor in her adult success. Yet in a book meant to encourage female empowerment, Trump otherwise seems unable to realize just how unrelatable the bulk of her advice really is.

Only a page after admitting the huge advantage she gained by growing up as the daughter of a wealthy businessman, she declares that changing the narrative around women and work has "become [her] life's mission." That's great, right? But her explanation of the ways in which she believes "modern professional women, like you and me, are openly embracing" their lives is almost cringeworthy:

We're owning who we are, endeavouring to become the best versions of ourselves inside and outside the office, and surrounding ourselves with people who support these goals. We're aspiring to do work that we love, work that inspires us, and we're pursuing our passions and unabashedly making them priorities. We're training for marathons and learning to code. We're planning adventures with our kids and weekend getaways with our friends. We are defining what it means to be a modern woman who works — for ourselves and our families, for the companies at which we're employed, for our culture at large, and for the generations to come.

It's clear from her words that Trump wholeheartedly believes that's exactly what she is doing, and even that she believes that's also what everyone else is doing, too. But as a 31-year-old mother of 4-year-old twins who works from home, I can't say my passions are unabashedly my priorities at this stage in my life. I also don't have much of an opportunity to train for marathons or go on a girls' weekend — and neither do any of the other young moms I know.

I actually do love my job, and am grateful to be able to do it everyday. But while Trump might be aiming to be her best self at the office, I'm just trying to ensure I get my work done on time to avoid being late picking up my kids after school. What's more important to me than having work that is fulfilling? Having work that will pay me enough to cover the cost of my children's summer child care, so that I can keep my job and continue to work when they return to school in the fall. And while I definitely care about spending as much quality time with my kids as possible, I also spend a ton of energy making sure we have enough snacks for their lunches, that their library books are returned on time, and that I haven't forgotten yet again to actually put the load of laundry I washed earlier in the dryer so that they don't run out of clean clothes.

Oddly enough, the closest Trump actually seemed to get to accurately describing the way many working mothers feel is when she talked about what her life was like during her father's presidential campaign. She said,

I went into survival mode. I worked and I was with my family; I didn't do much else. Honestly, I wasn't treating myself to a massage or making much time for self-care. I wish I could have awoken early to meditate for twenty minutes and I would have loved to catch up with the friends I hadn't seen in three months, but there just wasn't enough time in the day.

There's no doubt that Trump must have had an awful lot on her plate during that time, and it surely must have been a challenge. But it also doesn't even seem to occur to her that having time for massages and regular catch-ups with friends isn't just something that tends to go out the window during high-stress times for most women — they're things that don't often even make the radar in our daily lives.

When it comes to Trump's advice about managing the demands of work and motherhood, it's clear that it largely hinges on the assumption that women already have enough control and flexibility around their work to be able to spend time doing both. Throughout the book, Trump discussed the fact that she makes sure she has plenty of time with her kids, whether it be by coming home each day for bed time, by spending a dedicated amount of time with each one of her three kids each day, or by being sure to relax with them on the weekends in the garden of their country home (we all do that, right?). But while that's totally admirable, the fact that she even has the choice to organize her time that way already says a lot about her privilege in the workplace. She writes,

I had a standing lunch date with Arabella every Wednesday before she started kindergarten. We called it our 'working lunch.' She came into the office—she prefers my “pink” Ivanka Trump office to my real estate one, in part because it has a kids’ desk that folds out of the wall, complete with treats, toys, colored pencils, and markers. We’d play for a bit ... [then] we’d go downstairs to the Trump Grill for lunch; I’d bring paper, crayons, and little games, but her favorite thing to do was draw on project floor plans.

It's great for Trump and her daughter that they were able to spend that time together, and it no doubt allowed the young girl not only a chance to bond with her mom, but to see an example in her life of a woman who is clearly invested and dedicated to her work. The problem? Bringing your child into the office on a regular basis isn't easy, or even possible, for many women. And neither is rearranging your schedule to do school pickup, or having the opportunity to work from home later in the evening to spend more time with your kids before they go to bed.

There's nothing inherently wrong with Trump's take on balancing work and motherhood, and there's also nothing inherently wrong with the fact that her reality doesn't even sort of align with that of most working mothers. Trump is lucky to have been given a leg up in life, and it's evident from her personal success (she and her husband, Jared Kusher, are worth an estimated $700 million in combined assets) that she's done the best she could to make the most of that advantage. Ultimately, no one would necessarily even expect someone like Ivanka Trump to speak for all women, given how far removed she seems to be from the average experience.

Except that, well, that's more or less exactly what she attempted to do by writing this book. And furthermore, it's what she's attempting to do as a White House employee, pushing ahead the child care plan she helped draft on her father's behalf. That means that her perspective on motherhood really does matter, and the fact that she seems to consider her own experience to be that of the "modern working mom" is majorly concerning. If Ivanka really does hope to make a difference in her role in the Trump administration, perhaps she'd be much better off talking to and listening to working moms throughout the country, instead of merely trying to offer them advice on how to live their best lives.