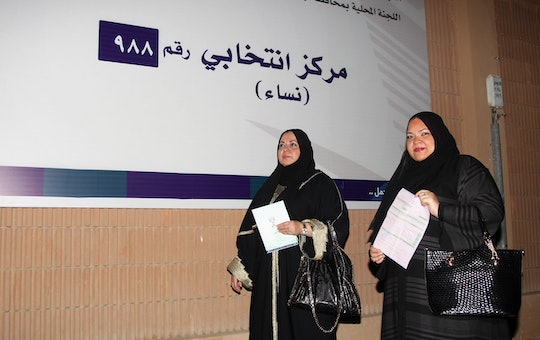 Women Will Vote In Saudi Arabia For The First Time Ever, & This Is A Huge Step Forward

For the first time ever, women in Saudi Arabia will vote in Saturday’s elections. Over 130,000 women are registered to vote in the election and there are actually over 900 female candidates actually running for office. Women still aren’t allowed to drive, or show up without a chaperone to vote, but it’s still a big move for the extremely conservative country. King Abdullah, who passed away last year, gave women the right to vote all the way back in 2011 — there just haven’t been any elections since 1965. He said that females “have demonstrated positions that expressed correct opinions and advice.”

While there are around 130,000 women registered to vote, they still don’t have total autonomy. First of all, Saudi women can’t go anywhere without a chaperone, so they’ll have to have a companion willing to take them to the polls. Other things Saudi women can’t do: open a bank account without their husband, buy a Barbie, or try on clothes when shopping, or enter a cemetery.

But women who show up tomorrow will be carrying on a bit of King Abdullah’s legacy. Before he died, he also appointed 30 women to the country’s top security council. Those are 30 seats out of 1,050 appointed by the king. Tomorrow, Saudi citizens will vote for the remaining 2,100.

The BBC talked to Salma al-Rashed, the first woman to register who said, "It felt really good. Change is a big word but the election is the way to make sure we are really represented."

Voting is a big deal, and so are the tiny, every day freedoms that Saudi women still don't enjoy. Deciding how excited to be is tough call for feminists everywhere.

It’s not just a big day for female voters in Saudi Arabia. This year, there are over 900 female candidates, but they're limited as much as any other candidate. Photos of anyone running for office are prohibited, as is anyone associated with the campaign to give women driving rights. Female candidates must speak to the public with a male representative present.

Change comes slow, anywhere. From 1965 until 2005, there were no elections at all in Saudi Arabia. Driving or not, tomorrow is a very big day.