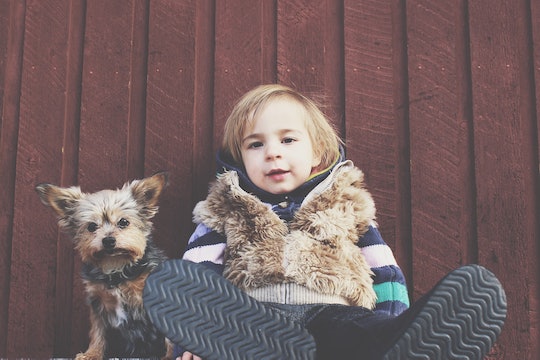 The internet offers up plenty of photographic evidence as to why babies and puppies are an adorable pair, but now science has backed up the match. It seems that, in addition to their well-demonstrated cuteness factor and obvious emotional charms, there are scientifically vetted health benefits to having a dog when you have a baby, too. New research found that women with dogs have healthier babies — which is great news for pet lovers.

Science has shown there are many benefits of having a pet: whether it be the emotional bond or the physical motivation to get outside every day (if you have a dog, you know rain or shine, sleet or snow, that potty-walks have gotta happen), science is always happy to inform us that our pets are a valuable addition to our lives. Some parents-to-be might worry about how their pets will adapt to the changes that come with a new baby. While there are definitely situations where pets and babies don't mix, parents should know that Fido provides benefits to their baby even before birth. The new research, published in the journal Microbiome, found that the health benefits provided by furry friends (particularly dogs) begin while a woman is still pregnant and continue after her baby is born, straight through to early childhood.

Researchers at the University of Alberta in Canada looked at more than 700 infants and moms between 2009 and 2014. They asked moms to note whether they had a furry pet in their home (70 percent of which were dogs) when they were pregnant through the first three months after their baby was born. The researchers took stool samples (of which there was no doubt an abundance) from the newborns and looked at them under a microscope to see what they could find out about their gut health. Years of research into probiotics has revealed the bacteria in the human gut tells researchers a lot about a person's health overall, according to the National Center for Complementary and Integrative Health. That being said, how much helpful bacteria a person has in their intestinal tract is influenced by a lot more than just what they eat — the environment around them plays a key role, too.

Knowing this, researchers found two types of helpful gut bacteria that showed up more often in babies who lived in a home with a dog. Ruminococcus and Oscillospira help the human body digest resistant starches, complex carbohydrates, and fiber. Aside from that, their presence has also been linked to reducing the likelihood of allergies, obesity, and even several types of cancer, according to uBiome.

The benefits don't have to end when baby grows up, either: previous studies have shown that kids have more fulfilling relationships with the family pet than their siblings.