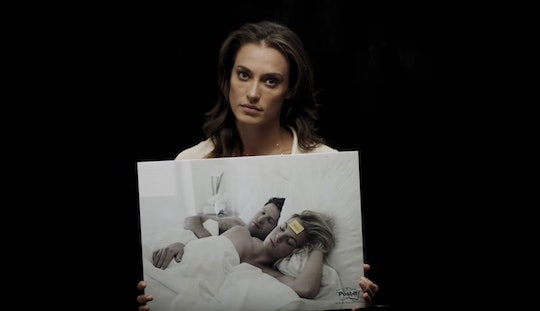 #WomenNotObjects Campaign Is Another Big Step In The Right Direction

The next time someone tells you that you're reading too much into advertising when you talk about the objectification of women, you can pull up the new video from the #WomenNotObjects campaign. Because isn't there always someone who tells you you're reacting about the portrayal of women in the media? The new video is a criticism of the advertising industry, but it was actually created by an insider, Madonna Badger, who's the chief creative officer and co-founder of Badger & Winters — and now, Badger and her agency are now leading the charge against objectification of women in their own sector.

The video features well known ads portraying women as sexual objects with voiceovers that highlight the absurdity of each concepts. Over a Tom Ford ad, one woman states cheekily, "When when I reach into my handbag, I'm always naked." There are bikini clad women selling pickup trucks and women spreading their legs for vodka. The video closes with title cards saying, "I am your mother, daughter, sister, co-worker, manager, CEO. Don't talk to me that way."

Badger, somewhat ironically, is best known for those iconic Calvin Klein ads featuring Kate Moss and Mark Walhberg from the 1990's, though according to The Wall Street Journal, she admits she was part of the problem. In an interview this week, Badger admitted to the paper, "If I said I never did it, I would be a liar."

Badger's agency, which works with clients like Nordstrom, Diane von Furstenberg, and Vera Wang, is now pledging to never use women as props in ads or photoshop them "to perfection", according to her interview with The Journal.

That's not an easy task in the advertising world. Adweek, for example, previously described the industry's response to the sexist portrayal of women in ads as a "collective shrug," in their acknowledgment of the campaign. "Some have argued that playing to animal desires just works, so why change course?" the magazine stated. It's a pattern that needs to change if people want to take the battle for gender inequality seriously.

The video's timing couldn't be more perfect either — released just as Super Bowl ads start making their way around the Internet, the campaign could provide a welcome dialogue that clashes with the other big game commercials. It might be good practice to start calling out the ones with sexualized women as props to sell burgers and cars too.

The Women Not Objects campaign isn't alone in its efforts, thankfully. Always' #LikeAGirl video series shows how our media socializes both women and men to think that doing anything "like a girl" means doing it not as well, or as powerfully, as doing something "like a man." The campaign's most popular ad made headlines after debuting during Super Bowl week in 2015.

Badger said this week that she was taking a stand for her own daughters, who died in a fire on Christmas morning in 2011, along with their grandparents. "I want my life to have a purpose," she told The Wall Street Journal about starting the campaign. "I love my job but I don’t want to do it if it hurts anyone."

It's one thing for brands like Always, Dove, and others to draw attention to the way the industry objectified women. It's just as useful, if not more so, for an agency like Badger's to simply stop making those sort of ads altogether. More importantly, it's a very big step in the right direction.