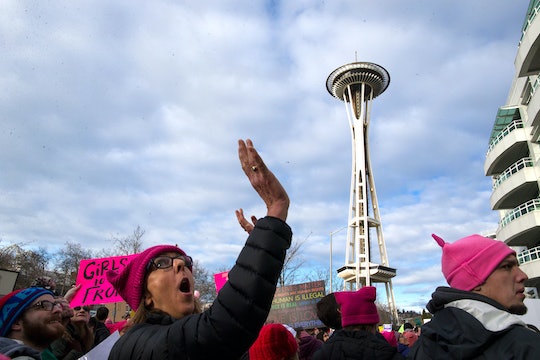 Last year, millions of people all around the world came together the day after the presidential inauguration to march in response to Trump's election and let him know that they were not happy. These people showed up in huge quantities, pink hats on their head, turning roads and highways into a sea of pink. These "pussy hats" made these people stand out amongst the crowd, making people aware of their presence. This year, these same people aim to do the same exact thing all over again with similar marches all over the world, except Women's March 2018 hats might be less abundant this year. Still, if you're looking for an alternative that lets people know you're not backing down without a fight, you might have to wear a different hat of your own.

This year, the organizers of the Women's March are holding the march in Las Vegas, Nevada (as opposed to last year's march in Washington D.C.), according to Glamour, where they will "launch a one year national voter registration tour." But just like last year's march, tons of satellite marches will be held all across the world. But it is the middle of January, after all, and these marches can get cold, so people will be bundling up in winter accessories, like scarves, gloves, and hats. But before you put on your "pussy hat" from last year, know that not as many people might be wearing them this year. This is because organizers of the Pensacola, Florida Women's March has called for participants to not wear the hats, according to the Pensacola News Journal, because they believe the hats "are offensive to transgender women and minorities."

So what should you wear instead? That might differ, depending on where you live.

Because this call to action started at one particular local march, you probably should contact the organizers of your own women's march to see where they stand on hats and what their own alternative is. Your own march might be trying to paint the streets of your city in a sea of blue or green. Therefore, posting on the event page to see what the participants of your local Women's March are doing is a safe bet to guarantee that you won't be standing out (in a bad way).

But some women are forgetting about hat alternatives and ditching them altogether. In an interview with Detroit Free Press, Women's March Michigan founder Pheobe Hopps said that she wouldn't be wearing a pink hat for this very specific reason:

I personally won't wear one because if it hurts even a few people's feelings, then I don't feel like it's unifying. I care more about mobilizing people to the polls than wearing a hat one day of the year.

But, if you do end up accidentally wearing your pussy hat, then you won't be the only one. Some people still plan on wearing their hats and the Pussy Hat Project, which called for women to knit and share hats with others all over the world last year, is still in effect for this year. There will be thousands of attendees at the march in New York City (22,000 have confirmed on the Facebook event, according to The Cut), and at least a few of them are bound to wear their pussy hat.

The decision to wear a pussy hat at your local Women's March should be left up to the wearer. It's a personal decision that should be made based on what you know about why people are against wearing the hat. Who knows? Your local forecast might not even be calling for hat weather.