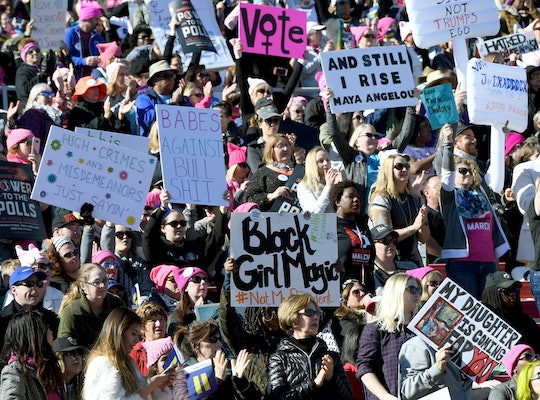 With just hours to go until the third annual Women's March, a protest that began in 2017 in light of the inauguration of President Donald Trump, women around the country are getting excited to hit the streets in unity once again. However, there are multiple Women's March cancellations you should know about, in case one affects you.

Though the main Women's March takes place in Washington, D.C., organizers ensure that there are marches taking place in major cities around the country, particularly for those whom it would not be feasible to travel to.

However, as of today, a few marches have pulled out of the lineup, The Daily Wire reported, after what they are calling a "drastic drop" in support. “Due to several issues we have decided it is necessary to cancel the 2019 Women’s March in New Orleans,” a post in the NOW Baton Rouge chapter explained.

“After meeting periodically for several months, it became clear we were lacking a leadership group that properly represented our community,” event organizer Allison Edrington told The Times-Standard. Agreeing the event’s vision was limited to experiences of its “mostly white” leadership, organizers chose to cancel the event, Edrington said.

“We could’ve and should’ve done more outreach,” Edrington told the publication. “But so far, we’ve been unable to get more voices to the table.”

However, issues of leadership lacking diversity is not the only reason the March has begun to, as Forbes reported, "lose ground."

In addition to the aforementioned issues, many are boycotting the D.C. March because sponsors including the Democratic National Committee, the NAACP and the Human Rights Campaign are withdrawing their support after co-president Tamika Mallory allegedly refused to "renounce" an anti-Semite.

I believe that all people have the right to exist. And that Palestinians are also suffering with a great crisis. And that there are other Jewish scholars who will sit here and say the same. I’m done talking about this, you can move on.

Though there are some who are boycotting the March for this reason, Rabbi Ammiel Hirsch of the Stephen Wise Free Synagogue in New York explained what what matters most is to understand that, whether or not you are marching tomorrow morning, the idea is that we fight together, for each other.

He clarified that their opposition to the March did not rescind their view that it was a worthwhile cause on its own. Forbes reported he said:

What matters most is not whether or not you march on January 19th. What matters is that we find a way to stay in the fight together. We are not disassociating from the original goals of the Women’s March.

Prior to this year's controversies, the March was widely regarded as a historical triumph. The first March, which took place nearly three years ago, brought in an estimated 5 million attendees, The Hill reported. For those who are heading to Washington, the event will begin at the National Mall between 12th and 3rd street on Jan. 19, at 11 a.m. At that time, protestors will head toward the Lincoln Memorial, at which there will be a rally between 1:30 p.m. and 4 p.m.

No further word has been issued on any other March cancellations, but they will probably be available on social media, so stay updated through tomorrow.