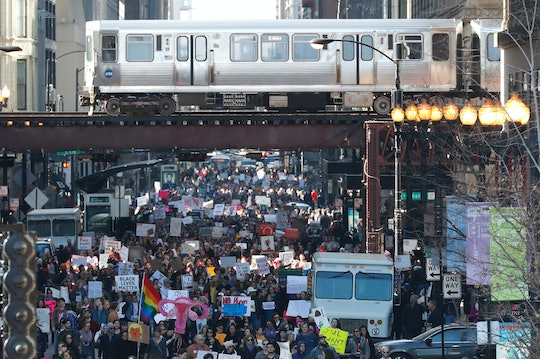 Chicago Women's March Canceled, But There Are Other Events Taking Place Instead

A new tradition for some families over the past several years has been attending the local Women's March in their towns. But this year, the Women’s March in Chicago was canceled due to high costs. Luckily, the city has a backup plan for later this month to keep at least part of the momentum alive for local residents.

As The Hill reported, the national movement, which sprung up in 2017 around the time of Donald Trump's inauguration, included a huge version of the event held in Chicago.

Millions attended similar events in major cities around the world, the outlet added, and around 300,000 attended the Windy's City's January 2018 event. But in December, local organizers announced the 2019 edition would not go forward, as the Chicago Tribune confirmed.

Planners cited the high cost to pulling off an event on such a massive scale in Chicago's Grant Park, according to the Chicago Tribune. (The Hill noted that organizers also cited a lack of volunteer resources, which would surely need to be epic to make the event safe and successful.)

According to Chicago's CBS 2 News, security concerns were another issue.

The cancellation comes in the midst of controversy for the national branch of the movement, Women's March Inc. Several of that organization's leaders have refused to distance themselves from Rev. Louis Farrakhan, whose group, Nation of Islam, is considered a hate group by the Southern Poverty Law Center, according to The Hill.

According to the Tribune, in a February 2018 speech, Farrakhan praised a Women’s March Inc. co-president in the same speech in which he said, "the powerful Jews are my enemy."

The national organization denounced Farrakhan’s comments the next month, but March co-president Tamika Mallory previously praised Farrakhan, The Hill added. In November, co-founder Teresa Shook said that national leaders should step down, having "allowed anti-Semitism, anti-LBGTQIA sentiment and hateful, racist rhetoric to become a part of the platform," the Tribune confirmed.

But Chicagoans have never taken anything lying down, and local residents are not giving up on women's and progressive causes.

Women’s March Chicago's Sara Kurensky, who told the Tribune that the local group is not affiliated with the greater organization, will encourage local events, like rallying in neighborhoods or volunteering at shelters or community organizations that day.

The event is dubbed "Operation: Activation" and will include all kinds of activities, ranging from larger, more influential action to things that are smaller and easy to accomplish in a short time or without spending a lot of money.

According to the Daily Herald, suburban activists are also taking their cues from the greater cause.

The first Women's March in the Chicago-area suburb of Geneva will take place Jan. 19, according to Mary O'Connor, who formed We Can Lead Change-Fox Valley, a local group aimed at protecting democracy and getting women into office, after attending the 2017 march in Chicago.

Additionally, according to another Chicago Tribune article, Women’s March Illinois planned an event beginning at 10 a.m. on Jan. 19, the day that women in other cities will be marching, at the city's Federal Plaza. This event is likewise not part of the Women's March official movement, and is, as such, expected to be way smaller.

"This will very much be a more informal rally to just be part of this important day of action," Mrinalini Chakraborty, one of the Women's March Illinois founders, told the Chicago Tribune. Other Illinois cities including Rockford, New Lenox, and Woodstock have their own events on the calendar, the Tribune noted.

As someone who gleefully attended the 2017 event in my own town, along with my whole family, I'm dismayed to see excitement melt away as in-fighting within the national group takes away from the progress it aimed to further: women, all women, working together.

It's good to know cities like Chicago won't let the ideas behind the original march go away, however, and that there are so groups getting involved in activism specifically to mark the event's anniversary. Perhaps other towns will follow suit.