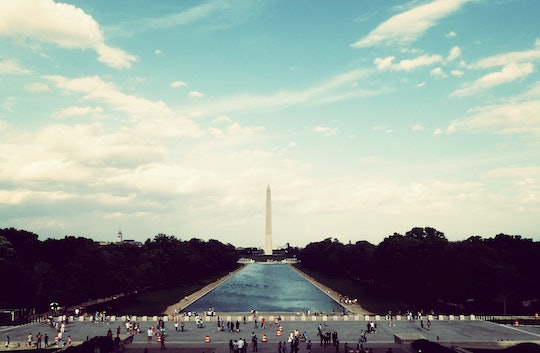 An organized march that's been in the making since the election back in November is preparing to flood the streets of Washington D.C. the day after the inauguration. The march is intended to be a peaceful protest, but many fear opposition may incite violence. There's some Women's March On Washington security info you should know if you'll be attending, because it's always a good idea to prepare so you can stay safe.

The Women's March On Washington is slated to take place at 10 a.m. Eastern Time, Saturday Jan. 21 — the day after the inauguration. The march will begin at the intersection of Independence Avenue and Third Street Southwest, near the U.S. Capitol, according to the march's official website.

The purpose of the march, as laid out in its mission statement, is to unify marginalized communities against the threat imposed by the rhetoric of the incoming administration.

The Women’s March on Washington will send a bold message to our new government on their first day in office, and to the world that women's rights are human rights. We stand together, recognizing that defending the most marginalized among us is defending all of us.

Given the violence and intolerance that has been incited in the wake of the election, participants and supporters of the march's mission have expressed concerns about the safety of those involved.

Since the event is taking place just a day after the inauguration, security in D.C. will likely still be flush. Individual groups who are organizing participants, like Planned Parenthood, will also most likely have security measures in place to help keep everyone safe. The march as a whole may release safety information to participants shortly before the event, or provide additional resources day-of.

A widely circulated post on Tumblr last week warned those involved against surveys that were allegedly being sent out to participants seeking their whereabouts. The post said these surveys may have been fronts for groups planning to stage a large-scale opposition to the march and its members. The post, by user ElleDeau, said surveys coming not from the official Women's March, but from a number of likely aliases, were seeking information about participants' accommodations and travel for the day of the march. She worried that the surveys may have been targeting participants for planned resistance, which could become violent.

While the Tumblr post may not reflect a specific concern, the general concern is not unwarranted. For those who are worried, it's important to note that the only survey directly linked from the Women's March website is for the purpose of getting a headcount. The organization team behind the march put together a survey (aptly titled Operation Headcount) as a means to determine how many people are expected to show up for the march. This would be important for planning not just the logistics of the march, but safety considerations too.

The best advice when it comes to staying safe at a protest, especially in extremely chaotic group settings, is usually a hefty dose of common sense. Stay with a smaller group within the larger march (which is likely to top thousands, if not a million, people), know how to identify those who are affiliated with the march or groups within it, keep your phone charged, and know who to call if you get disoriented. It's likely to be a historic day, and participants and supporters just want to be sure it makes history for non-violent reasons.