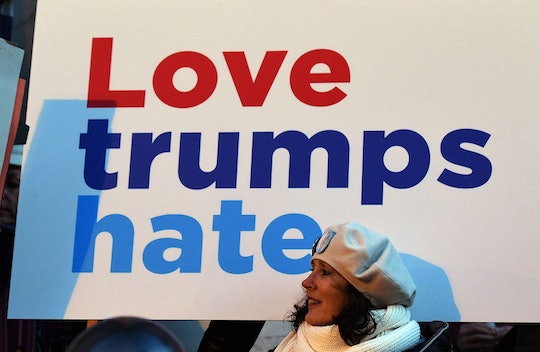 The Women's March on Washington might just be the most mom-friendly protest in history, with a reunification tent for lost children and multiple lactation tents planned. Now it's time to pull out the poster board and wrestle the markers away from the kids, and take your pick of these last-minute Women's March sign ideas for moms. First, you'll have to pick your favorite angle (or two, or five). The unique thing about President Donald Trump is that there are so many different issues one can have with him. There's his treatment of women, people of color, and immigrants (that he's not married to). His refusal to divest from his company or release his tax returns. His abysmal Cabinet picks. The possibility that he colluded with Russia to steal the election (which he denies).

There's a lot to dislike, and unfortunately, you can't fit it all on one sign (trust me, I tried like hell to figure out a way). You can, however, make a two-sided sign to cover a bit more ground. Once you've got your subject(s) nailed down, consider the tone you want to convey. Strength, anger, fear, sadness, light humor, or snark? And while we've all gotten a chuckle out of signs making fun of Trump's looks, let's not be mean. We're setting an example for our kids, and besides, Michelle Obama told us to be nice.

If you don't want to come up with your own statement, there are plenty of popular slogans to choose from. Originality is eye-catching, but hearing the same phrase over and over again can help cement it in people's heads and hearts. "Love Trumps Hate." "My Body, My Choice." "Black Lives Matter." "Women's Rights Are Human Rights." "Not My President."

Everybody likes a funny sign, and if you play your cards right, you could end up in a BuzzFeed listicle on Sunday morning. While it's hard to read a very long sign when it's moving, there will be a rally before the march, so maybe dedicate one side of your sign to a long joke. If you don't mind something a little off color, feel free to use "I'd Rather Have A Yeast Infection For The Next Four Years."

You can also get your point across in just a word or a short phrase, like "Nope," "Peace," "Resist," "Illegitimate President," or "Not Normal." And a short sign can still be clever, too. Why not try "GTFO, Trump" or "I'm Aggrieved AF"?

You'll know who your people are right away if you carry a sign inspired by your favorite book, show, or movie. Star Wars and Harry Potter both nicely parallel the current state of things. If you're artistic, you could draw Princess Leia, Rey, or Jyn Erso with a simple slogan like "Resist," "Rebel," or "Destroy The Empire." Or if you're a very good artist, draw Elizabeth Warren in Jedi robes, and caption it "A New Hope."

Finally, if you don't have the time, money, or patience to make a sign, you're not out of luck. Shepard Fairey's beautiful "We the People" signs are being passed out for free at Metro stations, and groups like NARAL and Planned Parenthood will be at the march with their own signs and stickers. And you can always bring a marker with you to add your own idea on the back.