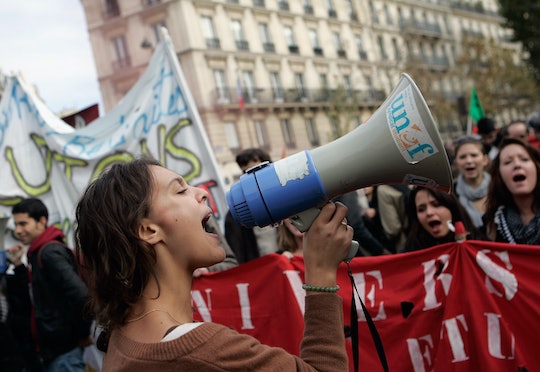 Wednesday, March 8 is International Women's Day, which also means that it will be the day of the "A Day Without A Woman" strike, organized by the Women's March on Washington as a next step to mobilize the growing female-led resistance. The goal is to abstain from all paid and unpaid work wherever possible to push back against gender oppression, and successful general women's strikes in the past suggest it has the potential to make a powerful statement. It makes sense then, that participants might want to buy strike-related clothing or items, but while Women's Strike merchandise might be cool, it's ultimately missing the entire point.

According to the Women's March on Washington website, the strike is meant to be a way of "recognizing the enormous value that women of all backgrounds add to our socio-economic system," despite the fact that they also happen to be paid less, and that they experience greater discrimination and job insecurity. It also highlights the fact that, for many women — particularly those who have low-paying jobs, those who lack job security, or those who assume caregiving responsibilities — walking off the job in support of their own rights isn't even a realistic option.

That's an important notion that needs to be recognized and discussed, and supporting the "A Day Without A Woman" strike is a really good idea. But while the Women's March spawned plenty of awesome merchandise meant to inspire and support the march effort (the Women's March on Washington even sold an official t-shirt online and in its Washington-based pop-up shop), the strike is a bit different. That's because in addition to abstaining from work, participants are also encouraged to avoid shopping entirely, with exceptions for supporting small businesses owned by women or minorities.

Not buying strike-related merchandise might not see like a big deal, but it actually is. That's because the strike itself is meant to be a "demonstration of economic solidarity," designed to show the very real impact that the absence of women workers can have. And all the women who can't realistically leave their jobs on Wednesday? Well, they can still support the effort by not buying anything, which will at least help send a statement with their wallets, if not through their physical absence.

What's more is that strike organizers have also already encouraged all women and their allies, regardless of their ability to strike, to wear red on March 8 in solidarity. That's a pretty simple way of finding at least some way to participate. And honestly? Seeing women from around the world wearing red in support of each other will probably pack a much bigger punch than if we all bought Women's Strike t-shirts anyway.

If you plan on leaving work to support the strike, the Women's March has drafted a sample letter that can be sent to your employer. Already know you'll be away? They've got a template "Out of the Office" auto-response email for you, too.