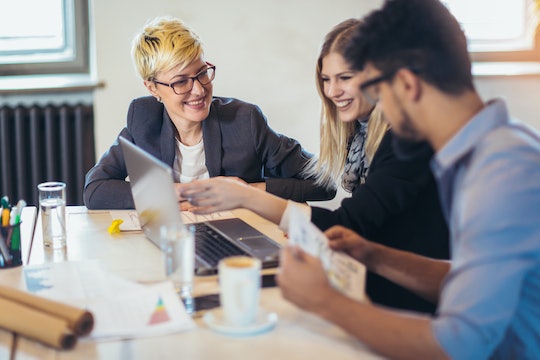 Women’s Voices Are Getting Lower Over Time, Thanks To Sexism

Before an interview or on their first day to a brand new job, people dress up. It's nothing new, as people have consciously and subconsciously altered themselves in order to project whatever image they need, but that change doesn't just stop at appearances. Now, scientists have found that women's voice are getting lower over time, thanks to sexism.

Aspects of our communication always change with time. The easiest example would be to look at language itself amongst different populations; whether it's the development of new dialects like African American Vernacular English or mainstream culture appropriating language from Black youth, language changes. More specifically, language adapts to whatever circumstances people find themselves in. But if language shifts, then there's nothing to say that our voices wouldn't shift, as well.

In the Journal of Voice, Cecilia Pemberton at the University of South Australia looked into acoustic characters by studying the voices of two groups of Australian women between the ages of 18-25 years old. The study was conducted using recordings made in 1945 and 1993. As reported by Ladders, the study found that the "fundamental frequency" had dropped by 23 Hertz (Hz) over the 50-year span. The average woman's voice in 1945 was recorded at 229 Hz compared to those recorded in 1993, who averaged 206 Hz. So, what brought about the change?

Researchers speculate, according to the BBC, that the change in pitch reflects the rise of women to more prominent roles of society, like the workplace. Although women replaced men in the workforce during World War II in the United States, that doesn't mean they held leading roles or the same degree of influence some hold today. In 2010, the United States Department of Labor reported that women accounted for 47 percent of the workforce. Regardless of position, women have to find ways to command respect to make it through a workday.

Traditionally, deeper voices aren't just seen as more masculine — they're dominating. As the Ladder noted, managing a room is difficult if your voice is constantly bordering on a falsetto. Not only are lower voices seen as more dominant, but the Ladder reported that high voices might make people want to mother you, instead of listen to you.

The researchers were very careful when selecting their samples for this study, in order to make sure data was controlled. As reported by the BBC, all the women were university students and none of them smoked. In addition, the team had to consider that women from the 1990s group were most likely to be using a contraceptive pill, which could lead to hormonal changes that altered the vocal chords. Even with that accounted for, the drop in pitch remained clear.

Even though this study is new, women in the past have been conscious of how a high pitched voice can affect their image. At the start of her career, the infamous Margaret Thatcher's voice was seen as too shrill for party broadcasts. The Telegraph reported that, before her election in 1979, Thatcher actually took lessons with a speech coach at the Royal National Theatre, to lower her pitch and develop an authoritative tone.

It was noted, according to The Telegraph, by her biographer Charles Moore who wrote, "Soon the hectoring tones of the housewife gave way to softer notes and a smoothness that seldom cracked except under extreme provocation on the floor of the House of Commons.”

Pemberton's study was conducted in Australia with Australian women, but the phenomenon has been noted in Sweden, the United States, and Canada. However, it is still important to note that it's not a universal concept. As noted earlier, language shifts for people to have a way to navigate their current context; the same can be read for voice pitch. Knowing that, people have to remember that women in different countries will be responding to their unique social circumstances. For example, women in the Netherlands consistently speak in deeper voices than women in Japan, but this is due to existing in different societies. One country's adaptation may not work for everyone.

It is still fascinating to note all the ways women can, and will, alter parts of themselves in order to make it. Fascinating and disheartening. It will be interesting to see what the trends show another 50 years down the line. How much lower will women's voices go?