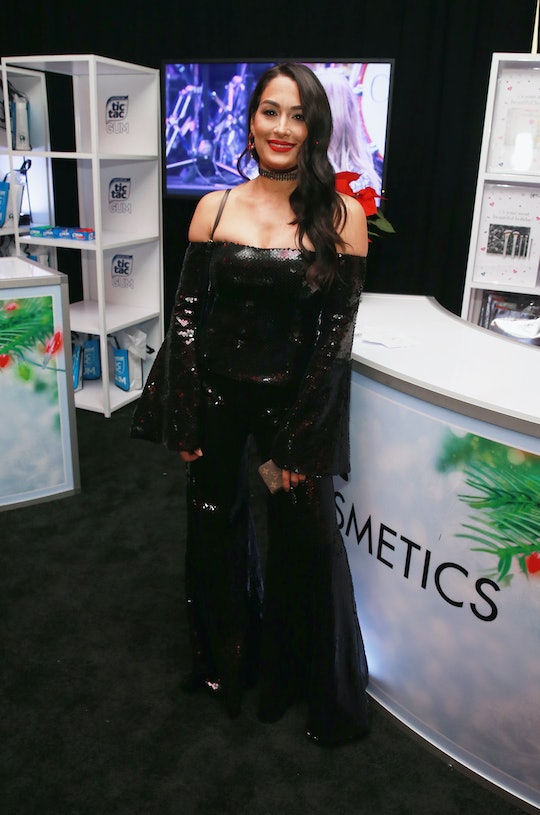 This 'Total Bellas' Star *May* Be Dating A Familiar 'DWTS' Pro

It's been almost a year since John Cena and Nikki Bella called off their engagement and six-year romance, with the confirmation in July 2018. In the time since, a few back-and-forth conversations have happened between both Nikki and John on camera, though so far, it hasn't been enough for the pair to reconcile. And while John's dating life, or lack thereof, may be a little more secretive, Nikki returned to the dating pool with connections to men like The Bachelorette's Peter Kraus (what the what?). But who is Nikki Bella dating now, actually? Inquiring minds are *desperately* curious.

Though there have been rumors swirling over that whole Peter Kraus situation — to be shown on an upcoming episode of Total Bellas — multiple sources claimed like Nikki may be involved with her Season 25 Dancing with the Stars pro partner, Artem Chigvintsev. It's actually not a total shocker because the duo had some serious chemistry. The part where it gets, uh, ironic is John also became close with Artem during Nikki's season, telling E! News in November 2017, "As far as dancing, I think he’s probably gonna teach me my first dance. So hopefully I’ll be able to take those tips from him there." He still could, I guess, but it might get weird considering the relationship switch-a-roo.

Though the romance may have been confined to a close friendship during Nikki's relationship with John, those feelings may have been at the surface, waiting to come up for air. Last summer, Nikki attended tapings of Dancing With the Stars: Juniors. That doesn't mean they were dating then, it's just an interesting aside. Then, during the Dancing With the Stars: Live tour, the two were spotted together at a California farmer's market over the holidays.

With Nikki and John's breakup only three weeks before their May wedding date, People confirmed a reconciliation in June, and a formal, second breakup in July. But there was apparently another get-together and parting of ways off camera after the first second try. Whew! That's a lot to unpack. Relationships are complicated but when it plays out on TV and in the news, probably more so.

"I had a beautiful and loving 6-year relationship with a wonderful man,” Nikki said. "I have the utmost respect for John, but I know this is what’s best for me." Though in a scene from Total Bellas, she also admitted to feeling confused, still feeling "in love with John," which makes dating anyone else a little hard. Maybe it's just me — and my Gram's undying love of all things Cena — but can't these star-crossed lovers just get back together again already?

Nikki told People Now John's very aware of everyone she's dating — including Artem, explaining it's because she respects him. "I told him like, 'Hey! I'm going on a date with this guy, just want you to know.'" She goes on to say that John isn't a "jealous" guy, and she doesn't want him to be caught off guard (in regards to paparazzi). John's response to his life after Nikki is a little more understated. "I'm keeping busy, man. I'm keeping busy,” he told Entertainment Tonight. "That's information I'm gonna keep with me."

The short answer to whether Nikki is dating is yes, but it's never that simple. With such a complex history with John — almost vowing their lives together — it's hard to say if this romance with Artem will go the distance, or if Nikki just needs to have a little fun. Regardless, the WWE star and her twin sister, Brie, know what they want and have no shame going after it. Wishing both Nikki and John the best, whether they ultimately end up together, or not.