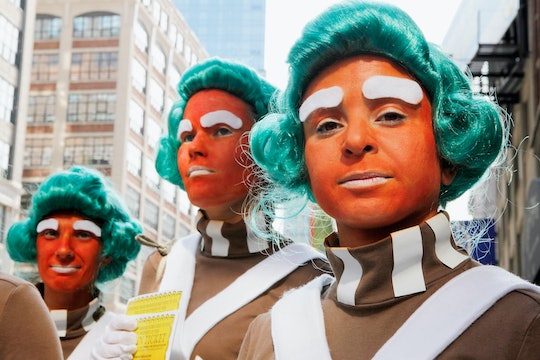 Words From Roald Dahl's Books That Made It Into The Dictionary

Parents might have to think twice now before correcting their children when they call a person a "human bean." After all, it's a proper phrase — and it's in the Oxford English Dictionary as proof. In honor of Roald Dahl on what would have been his 100th birthday, the Oxford English Dictionary is adding six words from Dahl's books that the beloved children's author coined or popularized in his various works, according to BBC.

“The inclusion in OED of a number of words coined by or associated with Roald Dahl reflects both his influence as an author and his vivid and distinctive style," CEO of the OED Michael Proffitt told the Guardian. Proffitt said that Dahl's work has been not only an early experience of reading for children, but also their "earliest exposure to the creative power of language."

Whether you remember them yourself, are eager to see them officially granted OED status, or simply need a few catchy terms to pepper throughout your next big work email or baby shower announcement, Dahl's magic lives on in the phrases and words he made famous and give everyone plenty of reason to rejoice on his birthday.

Read on to learn more about each of the six words the OED is adding in honor of Dahl.

When "scrumptious" is just too weak. The word had origins long before Dahl popularized it, according to Vineeta Gupta, the head of children's dictionaries at OED, although it was used perfectly in Dahl's The BFG:

"I is reading it hundreds of times," the BFG said. "And I is still reading it and teaching new words to myself and how to write them. It is the most scrumdiddlyumptious story."

Originally a mispronunciation of "human being." This variant was also popularized by the giant in The BFG:

"You is trying to change the subject," the Giant said sternly. "We is having an interesting babblement about the taste of the human bean. The human bean is not a vegetable."

The highly sought-after tickets that grant entry to Willy Wonka's chocolate factory. It's now commonly used as a synonym for a key to success or opportunity:

"Mother! Look! I've got it! Look, Mother, look! The last Golden Ticket! It's mine! I found some money in the street and I bought two bars of chocolate and the second one had the Golden Ticket and there were crowds of people all around me wanting to see it and the shopkeeper rescued me and I ran all the way home and here I am! IT'S THE FIFTH GOLDEN TICKET, MOTHER, AND I'VE FOUND IT!"

"Of course they're real people. They're Oompa-Loompas... Imported direct from Loompaland... And oh what a terrible country it is! A whangdoodle would eat ten Oompa-Loompas for breakfast and come galloping back for a second helping."

The time of night in which witches, demons and other scary creatures become especially active. The phrase was derived from "witching time of night" in Shakespeare's Hamlet, and the modern phrase was popularized by Dahl.

"The witching hour, somebody had once whispered to her, was a special moment in the middle of the night when every child and every grown-up was in a deep deep sleep, and all the dark things came out from hiding and had the world all to themselves."

From the Oxford English Dictionary, Dahlesque is something that resembles the works of Roald Dahl. Dahl's children's books are commonly characterized by "eccentric plots, villainous or loathsome adult characters, and gruesome or black humor."

Gupta told the BBC that the criteria for selection into the OED is very rigorous, and includes considerations about the longevity of the world and evidence the community understands the world. Lexicographers ended up with six words that stood the test of time.

"The lexicographers of the OED were looking to see whether some of those words used by children in Roald Dahl moved out of the children's world and into adult language," Gupta said. "And yes, they did."