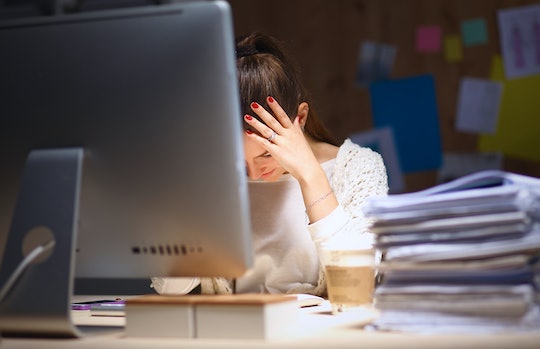 Feeling Stressed From Work May Be Hurting A Woman's Chances Of Pregnancy, New Research Finds

It can seem like society places value on being a workaholic. Sure, the image of a boss utterly obsessed with their job can be made into a joke (cue The Devil Wears Prada), but younger people are still told there can be value in bringing your work home with you. American culture isn't the best at promoting a healthy work-life balance and it's having some real-life effects. In fact, according to new research, work stress may be hurting a woman's chance of pregnancy.

Work stress can be hard to understand, since it's not always easy to define. There's no one thing that can be a guaranteed reason for stress. Instead, it's important to remember that stress is a reaction to a situation, as noted by the Canadian Mental Health Association. "We usually feel stressed when we think that the demands of the situation are greater than our resources to deal with that situation," according to the CMHA.

That means workplace stress generally refers to the combination of "high demands in a job and a low amount of control over the situation", according to the Canadian Centre for Occupational Health and Safety.

In the United States, work stress has seen a dramatic increase over the past few decades, as noted by The American Institute of Stress (AIS). And its consequences are very real.

In general, doctors have noted a link between stress and infertility, although they don't always know why the link exists. Understanding the role stress plays in fertility has become increasingly important.

According to the American Psychological Association's 2015 survey, younger generations and women have consistently struggled with stress. Since 2007, the APA's survey found that money and work are the top two sources of significant stress — at 67 percent and 65 percent in 2015, respectively. Combine this with the general stress of young women and stress' impact on fertility, it's worth looking into.

Now, a new study by researchers at Boston University finally dove into the impact of work stress on women looking to become pregnant. Published recently in the American Journal of Epidemiology, the study used data from Pregnancy Study Online, as noted by the journal's abstract. Researchers followed 4,769 women and 1,272 men, who had no previous history of infertility and hadn't been trying to conceive for more than six menstrual cycles, as noted by Boston University's School of Public Health.

Researchers found that women who reported feeling the most pressure from commitments were 25 percent less likely to conceive, according to the Daily Mail. Notably, the Daily Mail reported that researchers did not notice the phenomenon occur in men.

Although this study does not definitely prove that stress causes infertility, it does provide evidence supporting the integration of mental health care in preconception guidance and care.

Of course, pregnant people have held conversations about the importance of work-life balance during pregnancy before as noted by Working Mother. But, this study helps highlight the importance of holding those discussions well in advance.

Achieving a work-life balance can be difficult, but there are some easy tips to follow. Mental Health America recommended making sure to unplug. Technology is great, but being accessible 24/7 isn't realistic for long-term health. In addition, Mental Health America suggested employees set manageable goals each day, work on communicating efficiently, and get support — whether that's in the form of friends, family, or a professional.

Stress is quickly becoming a reality for most young Americans, but it doesn't have to be. It's important to consider stress' impact before you try to conceive.