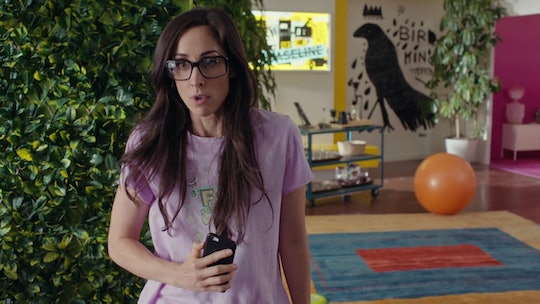 How Should We Feel About 'Workin' Moms' Joking About Consent?

Tackling the concept of consent seemed like a natural choice for Workin' Moms creator Catherine Reitman in Season 2, after using the Netflix comedy as a vehicle in Season 1 to explore issues like postpartum depression, the identity loss often precipitated by motherhood, abortion, and the true cost of “having it all.” If any show could get at the heart of what #MeToo meant to predominantly white, working mothers, I thought, it would be this daring Canadian-American hybrid.

Workin’ Moms truly did encapsulate my worldview the first go around with its ambivalence over the choices facing women who enter motherhood, but when the fifth episode of Season 2, “Consent,” opened on the (never-subtle) Kate, Anne, and Franki joking about getting taken from behind with carrots hanging out of their mouths, I found myself disturbed by Reitman’s treatment of such a sensitive subject. Anne, played by Dani Kind, groans that modern expectations around consent dictate that her husband “basically needs consent to even look at me.”

Kate, played by Reitman, sums up the shows’ apparent take on consent even more explicitly: just 38 seconds into the episode she calls it “such a buzzkill.”

Honestly, I almost shut off the show right then. After all, I can usually count on my leading ladies to tell me what a show is trying to say, and this was not a message I felt comfortable even listening to. But I pushed through my discomfort because surely Reitman didn’t really think enthusiastic consent was a buzzkill, right? Or worse, a joke.

But as the dialogue continued, the central characters only expounded on their dread. Consent is called “confusing,” “a gray area,” and the mothers from toddler time tell the always adorable and newly single dad Ian, played by Dennis Andres that he will need to “get a signature before you hold hands” with his new girlfriend. The women laugh. They’re joking. But naïve and well-meaning Ian isn’t sure, and a few scenes later, he basically tries to do just that, much to the chagrin and sexual frustration of his romantic interest.

Consent, Reitman seems to be telling audiences, spoils the mood.

I found myself shocked that the same show that treated abortion not as the last resort of a desperate teenager, but as the best option for a committed mother of two, could take such a regressive turn.

As the episode goes on, we wade into the practical implications of sexual harassment. Anne’s ex-husband, hypnotist and professor Dr. Brad, played by Christopher Redman, hypnotizes Anne and uses the opportunity to try and plant skeevy and harmful thoughts in her mind. Workin’ Moms never clarifies for audiences exactly how Dr. Brad’s conduct breaches ethical and moral codes, and it doesn’t need to — in the phrasing of the landmark obscenity ruling, you know it when you see it. Dr. Brad is an unequivocal creep.

But Workin’ Moms season uses more than just non-consensual encounters to make its case for uncomplicating our cultural understanding of consent. A number of sexual relationships are given as examples that portray couples with an unspoken but still clearly enthusiastic connection. Frankie is charged by a young woman she has never met and the two have sex in the changing room of the gym, Anne’s husband invites her up to “Room 69” over the baby monitor, and Kate tackles her husband halfway through roasting him for switching from boxers to briefs. While none of these scenes include a moment where one partner officially requests permission from the other, there is an overt understanding found in a myriad of contextual clues: body language, facial expressions, and mutual you-know-what-this-is flirtation. The standard is clear: everyone involved is a grown up and these are not gray areas.

As the season progressed, I began to realize that by turning our contemporary understanding of consent into a joke, Reitman hasn’t condoned “blurred lines”; instead, she has accomplished quite the opposite. Capital-C "Consent," as understood in the playgroup scene at the beginning of episode 5, is an over-complication of a concept that isn’t complicated at all. Ian didn’t need to ask his girlfriend for permission when every fiber of her person was exuding an enthusiastic yes.

By turning our contemporary understanding of consent into a joke, Reitman hasn’t condoned 'blurred lines.'

Reitman isn’t making the argument that consent is open to personal interpretation either, as pervy Dr. Brad’s abuse of his terrified students shows. The message is clear: consent is self-evident, and any person who says otherwise is pretending, and likely has selfish and creepy motives for doing so.

While society, embodied by well-meaning Ian, may be more comfortable following a predetermined script that follows established rules and ensures a clear conscience, there is a fundamentally honest and brave quality to Reitman’s suggestion. Because motherhood is full of contradiction, of competing feelings, and confusing situations. But choosing to treat other people with dignity and respect has always been as simple as following the golden rule. Even, and maybe especially, when it comes to sex.