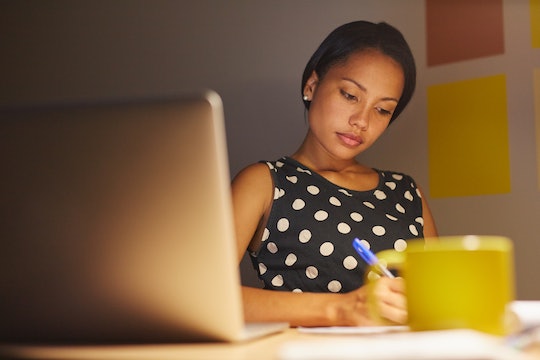 Working moms are tough. They put in full shifts at work, then come home and pull another shift full of housework, childcare, cooking, and more. But what about moms who are working while pregnant? While many working mothers have a standard 9 to 5 job, there are some that work well into the night for jobs that require around the clock attention. But a new study reports this may be harmful to mother and baby. A new study suggests that working late at night might increase risk of miscarriage. Here are the facts.

Researchers looked at Denmark's payroll data on 22,744 pregnant women who worked in public service. They compared it to the Danish numbers on births and admissions to hospital for miscarriage to determine how working night shifts affected the risk of miscarriages between 4 and 22 weeks gestation.

The findings suggested that women who worked more than two night shifts the week before had a 32 percent higher chance of miscarriage in the eighth week of pregnancy or beyond, according to the study.

And, researchers concluded that the more night shifts a pregnant woman worked in one week the higher her chance to miscarriage was, according to Science Daily.

The risk of miscarriage seemed to be greater after eight weeks of pregnancy.

"This may be explained by the decline in the proportion of chromosomally abnormal fetuses with gestational age, which makes an association with environmental exposure more easily detectable among later miscarriages," the authors said, per Science Daily.

It's important to note that because this is an observational study, the true cause of these miscarriages is unclear, according to Science Daily.

So what is it about working late nights that potentially causes a miscarriage? It could have to do with your body's circadian rhythms — or the way your body responds to night and day, according to Australia's SBS News.

When pregnant mothers, or anyone really, are exposed to artificial light (like the kinds in offices), their bodies don't recognize the time of day and therefore don't release enough melatonin, according to Sleep.org.

Melatonin is an important part of a healthy pregnancy, according to Healthline. In fact, it's an important element in the placenta and the amniotic fluid.

But, take these findings with a grain of salt, when compared to overall miscarriage rates in the United States.

A miscarriage is classified as the loss of a baby before 20 weeks of pregnancy, according to the March of Dimes. About 10 to 15 percent of pregnancies will end in a miscarriage, with most of them happening before the 12-week mark.

What this study doesn't take into account is the fact that most mothers must work during pregnancy, including those who have to take on night shifts. In fact, 72.3 percent of women work while pregnant, according to The Atlantic.

Should you worry if you work night shifts and are pregnant? There may not be enough information in this study to form a solid opinion. As always, your doctor is the best person to consult with questions and concerns. Until then, listen to your body and do what's best for you!