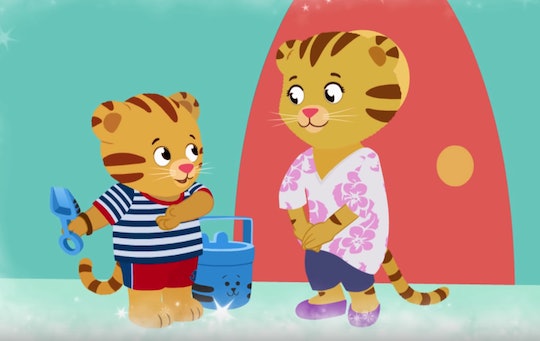 I watch a lot of cartoons during the day. I work from home, which means when my son is with me during the day. And that means, even though he plays around the apartment, I still have cartoons on in the background. But rarely do those cartoons show mothers who work. That's why I am living for Daniel Tiger's Neighborhood. In a much-needed move on television, working moms are getting some love on Daniel Tiger's new season.

In the fourth season of PBS Kids' Daniel Tiger's Neighborhood, which premiered July 9, Daniel Tiger's mom, Mom Tiger, returns to work after spending three years at home taking care of Daniel and his litter sister, Margaret, according to Fatherly. And the decision to have Mom Tiger go back to work seems to be, in part, to have the popular kids' show — which already deals with real issues children face — be more reflective of families today, where both parents hold jobs, Fatherly reported.

What's even better: The creators seem to have tapped into real scenarios that working parents and their children have to navigate. Take this scene for example: Daniel Tiger visits his mom at work and wants her to play with him, but she can't because she's working. He doesn't understand this at first, and keeps asking for her attention, but Mom Tiger explains that, while at work, she can't play and that Daniel can find something to do on his own.

I don't know how many times I've had the same conversation with my son.

Also, let's talk about the fact that Mom Tiger is a carpenter, which I personally believe to be an excellent choice on the part of the creators. It's not only nice to see Daniel Tiger's mom working in the first place, but that Mom Tiger is also working a job that defies decades of sexism in television, even in children's cartoons.

More and more women are entering so-called male-dominated fields now than ever before. In fact, there was a 77 percent increase of women working in construction since 1978, Inc reported earlier this year. The public safety sector saw an even more dramatic uptick in female employees — 118 percent, to be exact, according to Inc.

Yet, despite these increases, women who work physically-demanding jobs are still underrepresented in media. Too often, mothers are depicted as assistants, nurses, domestic workers, or in some other position stereotypically associated with women (if they're shown working at all, that is). But, although it's true that women still make up the majority of employees in these fields, according to Bloomberg, that doesn't mean every mother works in those industries.

It's a breath of fresh air, then, to have a mom in a wildly popular, mainstream cartoon who represents the workforce diversity that exists today.

But Mom Tiger's position as a carpenter has broader implications. She also represents the mothers who, even if they have a sedentary job, do physically-demanding housework. That's true for me: Even before I ended my relationship with my son's father, I was the one who built things, fixed things, and carried the heavy stuff — all those chores stereotypically associated with dudes.

With Daniel Tiger's Neighborhood, my son will now see that it's not just his mom who's brawny — that I am not some exception to some archaic sexist rule.

And this is so incredibly important, especially for mothers of boys. Personally, I have to fight every day against the "boys will be boys" mindset of other parents, even feminist ones. I have to pushback against this idea that boys will be rougher than girls, or tougher than girls, or whatever related gender stereotype you can think of. It's frustrating because it just perpetuates the sexism I am trying to combat.

So the more my son can see that's simply not true — that not all girls like pink or ponies or tutus — the better.