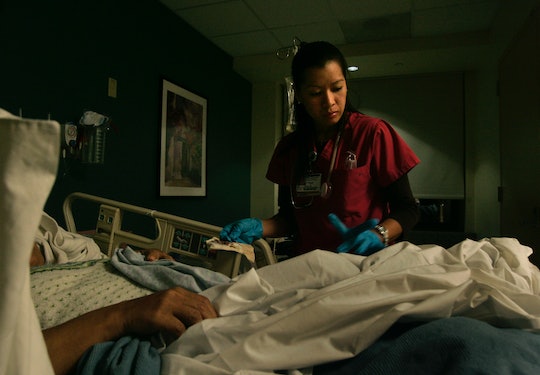 Working Nights As A Parent: "Sometimes I Think It Might Be Easier If I Didn't Have Kids"

When many of us think "working parents," we think about employees working a typical 9 to 5, who come home in the evening to do dinner and bedtime with the kids, take a few hours to unwind before heading to bed, and who wake up and do it all over again. But for parents who work the night shift, life looks very different and presents a different set of challenges that parents working traditional hours rarely have to navigate.

Nearly 15 million Americans work evening, night, or rotating shifts, as reported by the Bureau of Labor Statistics. Truck drivers, health care workers, air traffic controllers, construction and service industry workers, and factory workers — society relies on these night owls in order to keep going. And yet while night work is absolutely necessary, working against one's circadian clock can have some major consequences.

Regardless of how much sleep one is able to get during the day, circadian misalignment makes it harder to be alert, focused, and functioning at night, according to a January 2011 article in Monitor on Psychology. This can, in turn, lead to difficulty sleeping, fatigue, worsened cognitive abilities and reflexes, and can affect a person's mental health. These findings were recently borne out in a survey of nearly 500 graveyard shift workers from Best Mattress Brand, which indicated that 64% of individuals who worked graveyard shifts were either actively looking for a job with standard hours, or wanted to.

Sixty percent of respondents said working the graveyard shift took a mental toll on them, while 66% said they experienced a physical toll. This could largely stem from higher reports of difficulty falling asleep, staying asleep, or waking up feeling rested. The survey indicates that graveyard shift workers typically get four hours and 54 minutes less sleep than those who work traditional hours.

Parents surveyed had the added challenge of balancing family life with night work; 47% reported that working nights negatively affected their parenting, and 46% said they saw their children less than they would with a more traditional schedule.

Sometimes I think it might be easier if I didn’t have kids, or if I wasn’t married or in a relationship.

Char Dewey, a meteorologist for National Weather Service who works a rotating shift that includes "overnights," says that while there are some benefits ("I can do things during the week with my kids that most parents can’t do because they are working, like the zoo or doctor visits."), working nights is a struggle.

"I’ve been doing this schedule for over 11 years now and it isn’t getting any easier," she tells Romper. "Physically I try to ... eat healthy and exercise but, honestly, it usually falls through the cracks since I never, never get enough sleep. And as far as my health, if I’m not sleeping enough everything else falls apart."

Dewey, who has two boys, ages 3 and 7, says it's exhausting to be away from her husband and her children. "As they’ve gotten older they come to realize and understand when I have to kiss them goodbye at bedtime and say, 'I’ll be home before you’re awake.'"

Jedidiah Charles, a facilities maintenance technician in New York, tells Romper that working the nightshift is exhausting. "Besides throwing off your circadian rhythm and sleeping at weird times, it’s difficult it eat properly. I don’t really have time to make lunches or meal prep because we work 12-hour days, [plus] ... two and a half hours of travel." But he cites the worst part of working a graveyard shift as being away from his partner and two children, who operate on a daytime schedule."It’s a struggle trying to maintain a romantic relationship and feel like I’m being an adequate partner and father. It’s tough."

Not only does working the night shift make it difficult for parents to spend more time with their children and partners, it also shortens their life spans. A 2015 study published in the American Journal of Preventative Medicine, that studied 74,862 nurses on rotating night shifts, found that women who worked graveyard shifts for more than five years were 11% more likely to die early than those who worked normal hours.

So what's to be done? The National Sleep Foundation admits that alleviating the difficulties faced by night shift workers is not always possible, but there are ways to cope with working against the body's internal clock. While working, short naps during breaks may be helpful. (According to the National Sleep Foundation website, "Although most employers do not allow napping in the workplace, a ban on napping may soon prove to be a legal liability.")

Alternately, remaining active (maybe even getting in a little exercise, if possible) and making use of caffeinated beverages can also be helpful to help keep alert on the job. Once off the clock, the Foundation advises wearing dark glasses (to block sunlight) on your way home, sticking to a sleep schedule as much as possible (including days you're not working) and avoiding caffeine and alcohol close to bedtime. Traci K., a post production TV supervisor, told the Foundation that a clean house and feeling organized helps her mitigate the stress of working nights, so partners of those working the graveyard shift can help their significant others by limiting the amount of housework they have to tackle when they're awake.

"My partner is pretty understanding that I'm not at the top of my game when I'm awake for the brief moments I'm home," Charles says. “I forget things we talk about and sometimes I don’t get things done, but she knows I’m not blowing her off. I’m just that tired and forgot something.”

Work is usually challenging. Parenting is always challenging. And, certainly, working unusual (if not uncommon) hours can ramp up the difficulty of both significantly. But, somehow, millions of parents are somehow making it work every day. "Sometimes I think it might be easier if I didn’t have kids, or if I wasn’t married or in a relationship," Dewey says. "But then, what’s the fun in life?"

More Like This
Reddit Applauds Mom Of Five Who Stood Her Ground & Left Sleeping Dad Behind
10 Ways Breastfeeding Is Good For Moms, Too
9 Reasons Why Some Women Can't Breastfeed
6 Mindfulness Activities For Kids