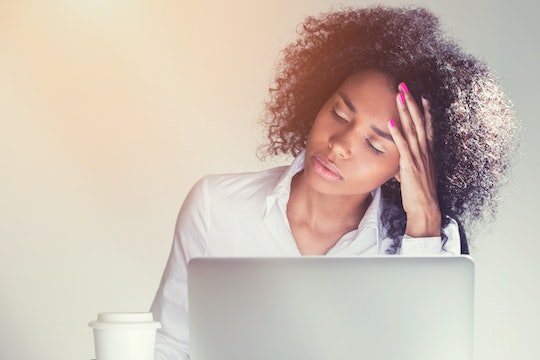 Workplace "Burnout" Is A Legitimate Concern, According To WHO

If you've ever felt pressured and totally stressed out after a long day at work, you're not alone. In fact, the World Health Organization has officially recognized that workplace "burnout" is a real concern. And this is an important distinction when addressing the needs of taking care of our mental health, especially for parents as they're job isn't over when they leave the office.

On Tuesday, May 28, WHO announced that it would be now classifying workplace burnout as an occupational phenomenon, according to CNBC, giving recognition to a very common feeling among adults. It's important to note that this concept is not classified as an illness, health condition, or medical condition; rather it's as a "conceptualized syndrome" that can affect many people.

This is the first time WHO is actually recognizing burnout, according to Quartz, and that's important because it's possible that many people don't even recognize that they're feeling burnt out by their work. If people feel depleted of their energy or exhausted, have negative feelings towards their job, and aren't as efficient, then it's likely that they are experiencing burnout, according to WHO.

So if you're feeling burnt out, what do you do? Although WHO did not say that workplace burnout needs medical attention, there are ways to "combat" it, according to NBC News, like going for a walk or taking a vacation.

Now that burnout has been recognized by WHO, hopefully workplaces do as well. After all, workplace burnout isn't a brand new concept.

And there are major health risks associated with burnout. One 2017 study found that workplace burnout can lead to physical consequences, like type 2 diabetes, coronary heart disease, prolonged fatigue, and headaches, among others. This is on top of the psychological effects that those experiencing workplace burnout can feel, like insomnia and depression, according to the same 2017 study. The research concluded that there needs to be preventative interventions, or identification of job burnout in the workplace early on. So it's great that WHO is recognizing this now and workplaces and employees can be more proactive about creating preventative measures.

Dealing with job burnout requires action, according to Mayo Clinic. Those who have feelings of despair associated with their workplace and their workload should evaluate their duties at work, reach out to their support system, and consider what further actions they can take to combat this.

But it's important to note that WHO's distinction only recognizes burnout in the workplace, not anywhere else. While studies have found that parenting burnout — or feeling exhausted and less productive due to raising children — does exist, according to CNN, WHO's new announcement does not pertain to this. One 2017 study found that 13 percent of parents have what researchers call "high burnout."

Burnout is real, in many aspects of life, and WHO's recognition will hopefully encourage people to take preventative action if they're feeling drained.