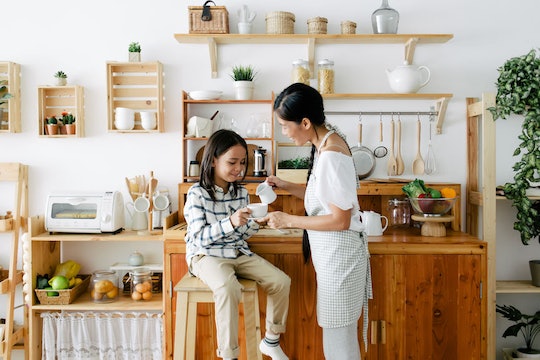 The Huge Gap In Workplace Protection For Pregnant Employees Is Unsettling

While New York City has adopted some of the nation's best pregnancy and caregiver discrimination protections, a new report from the New York City Commission on Human Rights has found that workplace protections don't reach pregnant people working in private homes. In fact, while some workers reported being able to discuss pregnancy, childbirth, and caregiving accommodations with their employers, more reported being forced to hide their pregnancy for fear of being terminated. Others noted that employers often refused to grant them time off for prenatal doctor appointments, with some employers reportedly offering to cover the cost of an abortion rather than accommodate an employee's pregnancy.

"Current laws fail to protect domestic workers who are especially vulnerable to pregnancy discrimination," the NYC Commission on Human Rights notes in a report shared with Romper about its 2019 Public Hearing on Pregnancy and Caregiver Discrimination. Although the NYC Human Rights Law mandates that employees be given "reasonable accommodations ... related to pregnancy, childbirth, and related medical conditions to enable them to continue working and/or return to work promptly while maintaining a healthy pregnancy," the law only applies to employers with four or more employees.

...Testimony described employers who have offered to pay for abortions rather than accommodate a worker's pregnancy by providing time off for prenatal care...

"For many domestic workers, they feel that they have to hide pregnancies from their employers for as long as possible because when they do disclose their pregnancy, they are subject to being fired without any repercussions," the report quotes Marrisa Senteno of the National Domestic Workers Alliance from her testimony before the commission.

Those who care for others' children do not have the legal rights to receive accommodations to care for their own pregnancies, children, and wellbeing.

According to the commission's report, testimonies from workers, activists, medical providers, and advocacy groups highlighted the fact that "those who care for others' children do not have the legal rights to receive accommodations to care for their own pregnancies, children, and wellbeing." The commission also stressed that testimonies indicate domestic workers are often harshly judged for their family planning decisions, as employers place the care of their own children over their nanny's right to choose.

"Hearing testimony described employers who have offered to pay for abortions rather than accommodate a worker's pregnancy by providing time off for prenatal care, such as a doctor's appointment, or other accommodations," the report outlines. It adds that testimony also divulged how employers have refused to grant domestic workers time off during the week to attend postpartum doctor appointments, potentially resulting in workers being discouraged to seek care and developing high-risk health complications.

In an effort to combat pregnancy discrimination against domestic workers, the commission is taking into consideration the recommendations made by advocates, stakeholders, and experts to extend the NYC Human Rights Law to include all workers, regardless of workforce size. Abolishing the four-employee limit would also serve to allow domestic workers currently unable to file pregnancy discrimination complaints against their employer to pursue them.

But expanding the NYC Human Rights Law isn't the only legislative action the city could take, according to the report. The commission is also considering improving the city's Domestic Workers Bill of Rights. Passed in 2010, the law guarantees domestic workers' access to things like rest days and overtime pay. Specifically, the commission calls for expanding the law to provide more financial assistance to domestic workers who are pregnant or raising young children.

It's worth noting here that domestic workers who've clocked 40 or more hours a week for 26 consecutive weeks for a private homeowner are currently guaranteed up to 10 weeks of paid leave under New York's Paid Family Leave law. According to The New York Times, the law is expected to guarantee up to 12 weeks at two-thirds pay by 2021, making it the most generous paid leave law in the nation.

It was also recommended to the commission that the city conduct outreach and education campaigns in order to better inform workers of their rights and employers of their responsibilities, noting that testimony had identified a significant lack of understanding of both. "Accommodations for pregnancy, childbirth, and related medical conditions should not be seen as inconveniences, but instead should be framed in a supportive way that builds the employer-worker relationship," the commission's report reads.

New York City isn't the only place seeking to strengthen domestic workers' rights. Earlier this month, Sen. Kamala Harris and Rep. Pramila Jayapal introduced the Domestic Workers Bill of Rights Act. If passed, the law would essentially expand federal labor laws to include domestic workers while also granting them new benefits such as paid time off and written employment contracts and establishing a task force dedicated to enforcing these rights, Vox has reported.

Although it comes as no surprise that domestic workers have long been overlooked, or even purposefully left behind, by labour laws, the oversight undoubtedly has a detrimental affect on domestic workers, many of whom are immigrants or women of color. As the New York City Commission on Human Rights' report shows, domestic workers remain among the most vulnerable to pregnancy discrimination — making legislative efforts to expand their workplace protections vital.

Editors note: This post has been updated from its original version.