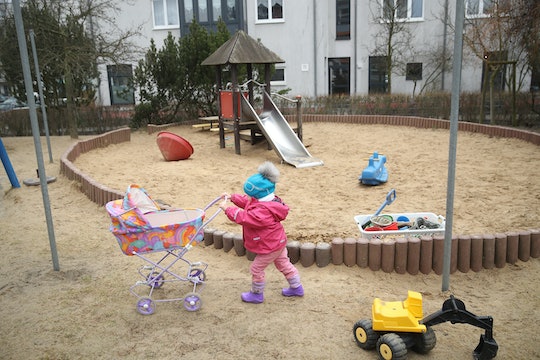 Getting a spot at a licensed daycare in Toronto can be like securing front row tickets to a Drake show. “I have been on four different wait lists for almost a year and so far no spots have come up,” says Lani Milstein, mom to an eight-month-old daughter. The self-employed theatre producer is hoping to return to work in the fall but first she needs a reliable childcare solution, amid a dire shortage of daycare options.

Earlier this year she thought she’d found her answer. A new 82-space licensed daycare announced that it was planning to opening in her neighborhood. Known as Cabbagetown, the historic residential area that Milstein calls home is rich in period-authentic Victorian homes but short on childcare.

“Daycare options for babies and young children in this area are very limited,” notes Katherine Knowlton, another Cabbagetown mom on maternity leave. Like Milstein, she was planning on enrolling her child in the daycare.

But while both women were thrilled at the prospect of their new neighbor, some other Cabbagetown residents found the idea of living near a childcare centre “outrageous.” In April, their not-in-my-backyard (NIMBY) attitudes were on full display before a packed a zoning adjustment meeting that went on to decide the fate of the daycare.

After noting how the centre planned to have a backyard play area, a potential neighbor expressed his worries about those darn kids causing too much of a racket. “The idea of tolerating this type of noise is frankly ludicrous, and completely incongruent with this, or any other residential corner in this city,” he wrote in an objection letter.

He also stated, “… the idea of plexiglass wall, jungle gyms and plastic toys and signage in pastel colours is truly distressing.” No, not pastel colours! At the meeting, another objector pointed out the “heritage concern” of stroller parking.

Butt was concerns around traffic that ultimately did the daycare in. While Knowlton struggles to buy this worry — “Given the volume of children in this neighbourhood,” she says, “I suspect a significant majority of the attendees at the daycare would walk” — the city of Toronto cited traffic as its primary reason to reject the daycare’s application to open. And so Toronto, a city where a pregnancy announcement is often greeted with, “So what daycare wait lists are you on?” lost dozens of new childcare spaces.

Unfortunately pushback against daycares from NIMBYs is hardly restricted to Toronto. They’ve complained in Virginia, Pennsylvania, California, Alberta… You get the idea. Thankfully for the children, officials in those just listed examples ignored the cranks and allowed the proposed childcare spaces to open.

Roughly half of these Americans live in what it called 'childcare deserts,' which it defines as 'areas with little or no access to quality childcare.'

While these decisions might have cost some politicians a few votes, supporting licensed childcare is something municipalities should be actively doing since many parts of North America are dealing with a shortage of daycare spots. In 2017, the Center of American Progress analyzed the licensed childcare situation for 22 states, about two-thirds of the U.S. population. It found that roughly half of these Americans live in what it called “childcare deserts,” which it defines as “areas with little or no access to quality childcare.”

The impact of this shortage won’t surprise anyone: Parents, usually moms, taking a hit to both their career. A 2015 national poll by The Washington Post revealed that a lack of paid leave or daycare resulted in half of fathers, and more than three-quarters of mothers, passing up on work opportunities, switching workplaces or even just flat out quitting.

There’s no debate; quality childcare equals employed parents. And when people work, they can do things like pay taxes, buy products and services and set down roots. In other words, daycares strengthen their local economies and neighborhoods.

Politicians and municipal official that don’t bow to NIMBY pressure should be applauded for their abilities to step back and see this bigger, long-term picture. And local residents who don’t should mull over this question: Would you rather a daycare in your neighborhood or would you rather pay higher taxes to support the social programs that un- and under-employed parents will need since the lack of quality childcare prevents them from reaching their employment potential?

While many NIMBYs defend their position with an “I was here first” defense, they’ve seem to have forgotten that that by choosing to live in an urban or suburban location, they’ve chosen to live somewhere dynamic; that will have traffic, noise and change. By pushing back against this, NIMBYs ultimately only end up harming their beloved neighborhoods by scaring off potential businesses and residents that could bring new life—and cash—to the area.

This isn’t to say that daycares should be allowed to open without a second thought. But setting one in a residential neighbourhood —near parks, recreational centers and most importantly, its customers—is a concept that generally makes sense.

Instead of hyperbolic letters of objection or, worse, threats and harassment, NIMBYs should work with daycare owners to create an environment that everyone can enjoy. After all, some of their objections have merit. A new daycare in a car-dependent neighborhood likely will impact traffic. But regular enforcement can work magic when it comes to getting people to following traffic rules around parking and U-turns. And while no daycare will ever be mistaken for a library, outdoor playtime can be restricted to certain times. As for the aesthetic concerns, “nature-inspired playgrounds” are a real thing.

Ultimately, NIMBYs who push back against daycares are only hurting themselves. While the bulk of these individuals would likely prefer to live in their homes until their deaths, many of these residents will eventually have to sell their homes. And you know what neighborhood amenity would make those houses attractive to young families and couples? A daycare.