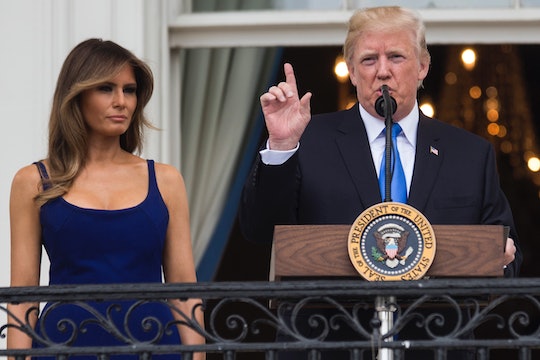 Would Trump's New Immigration Policy Bar Melania From The US?

On Wednesday, Trump announced his support for a GOP bill in the Senate aimed at drastically reducing immigration levels. Dubbed the RAISE Act — an acronym for "Reforming American Immigration for Strong Employment" — Sens. Tom Cotton and David Perdue seek to create a "merit-based" system for immigration and naturalization into the United States. Trump's wife is only the second first lady to have been born outside the country; the first was John Adams' wife, Louisa. Given her own immigrant status, would Melania Trump have been allowed into the United States under Trump's new immigration policy?

Melania Trump has a complicated immigration history. Before she was a Trump, she was Melania Knauss, born in the city of Novo Mesto, Slovenia. At age 26, Melania moved to New York City, according to Vanity Fair. Her current immigration lawyer, Michael Wildes, told The Jewish Standard in December that Melania first entered the United States on a visitor visa before obtaining a series of H-B1 work visas.

But just three days prior to the election, the Associated Press broke the story that Melania had worked illegally as a model before getting her work visa — and it's important to note that Trump has not had her U.S. citizenship revoked or been charged with a crime since then. Trump campaign spokesperson Hope Hicks did not respond to the AP's request for comment at the time, and the White House did not immediately respond to Romper's request for comment. But as we all know, that story did nothing to stop the anti-immigration candidate from winning the election.

Melania obtained her green card in 2001, four years before she married Donald, and became a U.S. naturalized citizen in 2006. While many green cards are associated with marriages, Melania's green card was self-sponsored. She obtained hers for her "extraordinary ability or achievement" as a model, according to The Washington Post, which is one of the standards of how H-B1 visas and green cards are issued by United States. So how would Melania have faired if the RAISE Act were law when she entered the country?

Per President Trump's tweet on Wednesday, a White House announcement laid out the basic foundations of a merit-based immigration system: "The system rewards education, English-language ability, high-paying job offers, past achievements, and entrepreneurial initiative." How do Melania's qualifications stack up?

According to CBS News, Melania attended the University of Ljubljana in Slovenia for a year and is fluent in five languages. Once she met the president, her modeling prospects picked up substantially, landing covers for Vogue and Vanity Fair, the latter noted in a recent profile of the first lady. Melania has had a number of businesses over the years, including both jewelry and skincare lines. At a quick glance, it would seem that yes, Melania would most likely meet the requirements for immigration and naturalization under the RAISE Act — even though her own immigration record still raises questions. It's also important to note that Melania's "high-paying job offers" and "entrepreneurial initiative" were largely affected — and increased — by moving to the United States and being granted access to certain people and modeling jobs for major U.S. publications.

That's all well and good when you're Melania Trump, but what if you're one of the hundreds of thousands of other immigrants trying to work, live, and become productive members of American society — just as Melania wanted to and has — but could now face tougher restrictions to get into the United States?