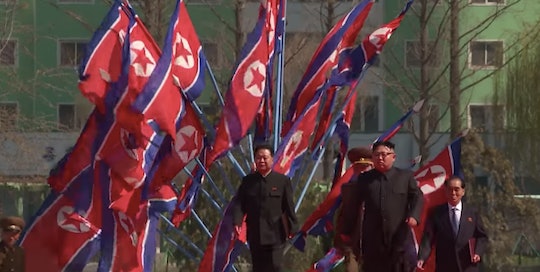 Would North Korea Bomb The US?

According to The Los Angeles Times, North Korea has hinted that it will do something to commemorate the 105th anniversary this Saturday of the birth of the "modern country’s founder," Kim Il Sung. And though the leader of the Democratic People's Republic of Korea, Kim Jong Un, has warned that the country might attempt to test an intercontinental ballistic missile, according to that outlet, analysts believe that it isn’t ready for testing. With all this talk of tensions between North Korea and the United States, would North Korea bomb the U.S. if they had a chance? Experts say that is an unlikely end result of the tense situation.

The LA Times reported that, while North Korea could test another short or medium-range missile, or a nuclear weapon, it is not likely that North Korea could target the U.S. mainland with the current technology the country has on hand. However, closer countries like China are now warning that tensions on the Korean Peninsula could become more unstable, according to The New York Times. "There have been storm clouds gathering,” China’s foreign minister, Wang Yi, said in Beijing, according to Xinhua, their state news agency.

China’s president, Xi Jinping, is calling for restraint. But North Korea is blaming President Donald Trump and the U.S. for the rising tensions in that region, according to CNBC.

The LA Times reported that, though it is unlikely North Korea would be able to target the U.S., 28,000 U.S. stationed troops in South Korea and 50,000 in Japan are, by comparison, within striking distance. Specifically, those stationed near the demilitarized zone between North and South Korea could be vulnerable, and the South Korean capital of Seoul — only 30 miles away — could be at risk as well.

According to that outlet, Carl Baker, a retired Air Force officer who was stationed in South Korea but is now with the Pacific Forum CSIS in Honolulu, Hawaii, stated:

There would be a great temptation for the North Koreans to throw a few artillery shells into Seoul. They might not be able to flatten the place, but they could do a lot of damage.

U.S. allies South Korea and Japan might be more angry than China if the U.S. took action against North Korea, because they would likely bear the brunt of retaliation from the country, according to the LA Times. CNBC reported that the Japanese Prime Minister, Shinzo Abe, warned on Thursday that North Korea could be capable of firing a missile with sarin nerve gas toward Japan instead.

A former acting director of the CIA said on Friday that Trump is making the tense situation worse. "With our bluster and by sending aircraft carriers in there, we’re raising the crisis," Mike Morell said Friday on CBS This Morning according to Politico. He also stated of Kim Jong Un:

It's best to just ignore this guy and to deter him from ever using these weapons or selling them and to build our defenses.

In an interview with the Associated Press, North Korea’s vice foreign minister Han Song Ryol said the country is prepared for war with the U.S. if it comes to that. But that outlet agreed that even without nuclear weapons, the South Korean capital of Seoul would be more likely to take severe damage from the North in the event of an attack.

According to the Huffington Post, "experts have long said simple geography provides one of the biggest deterrents for direct action against the North." The area around Seoul houses more than 50 percent of South Korea’s population, and is in striking distance of North Korea's non-nuclear arsenal. The Huffington Post reported that international security analysts doubt reports that the U.S. may consider a preemptive military strike against North Korea for that reason, among others.

NBC News concurred that North Korea isn't believed to have a "deliverable long-range nuclear weapon," and that it does not possess an intercontinental missile — yet. So for now, it's unlikely that North Korea would, or even could, bomb the United States.

But any sort of provocation or attack on North Korea by the United States could spell big trouble for closer countries such as South Korea or Japan. It's a high-stakes situation that will take careful consideration and diplomatic action to navigate, to say the least.