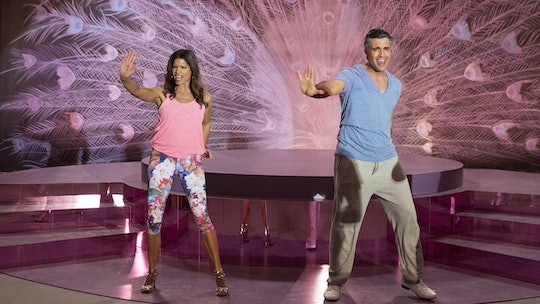 When it comes to Xo and Rogelio, it seems like they may never ever get back together no matter how much fans want them to. However, Monday night's episode gave fans some hope when Xo and Rogelio entered into a dance-off on Jane the Virgin that showed just how much fun they still have together. Not to mention all of that chemistry radiating out of those dance moves.

Apparently when they were in high school, Xo was on their school's dance team. Although Xo had an excellent plan for the team's routine, Rogelio had some other ideas. Naturally the two couldn't agree on the best routine and Xo accused Rogelio of just joining the team so he could have girls dance around him and that he couldn't even dance. Refusing to back down, Rogelio and Xo had a dance-off and it was an excellent mix of hilarity and cuteness.

Fast forward to the present day and there was clearly some kind of private joke floating between Xo and Rogelio about dancing. Finally when the details about their dance-off were revealed via flashback, Xo and Rogelio ended up having yet another battle in Xo's new dance studio. However, this time Rogelio lost because he pulled a muscle. (It turns out he's not as young as he used to be.) Once Xo realized Rogelio was actually hurt, she ended up comforting him, which led to a moment between Xo and Rogelio where he confessed that he'd joined the dance team to get only "one girl" and obviously that girl was Xo. However, Xo has finally accepted the fact that their relationship is over and told Rogelio she's happy they're now good friends.

Despite Xo putting Rogelio squarely in the friend-zone, after talking to Rafael, Rogelio decided that what he had with Xo is worth fighting for and he goes to her new dance studio to tell her so. Unfortunately, when he got there he discovered her kissing her ex-boyfriend, Bruce, who owns the law office next door. Sad and disappointed, Rogelio finally realized that he has to move on and let Xo go for real.

Although it was heartbreaking to watch, it may be time for the fans to finally accept that Xo and Rogelio aren't getting back together after all. At least, not right now. Never say never, though, right?