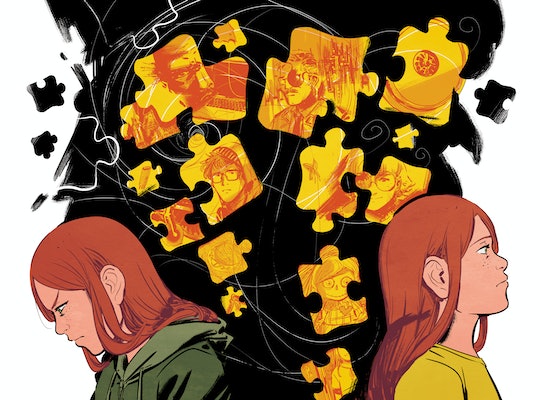 Tackling Gotham's Ableism, One Graphic Novel At A Time

Author Marieke Nijkamp doesn't shy away from tough-hitting subjects. She tackled gun violence in her bestselling debut This Is Where It Ends and mental illness in her sophomore young adult novel (also a bestseller) Before I Let Go. Nijkamp also edited a young-adult anthology about disabled teenagers, Unbroken. It's a natural fit for her to jump into the gritty world of Gotham, writing The Oracle Code.

Our hero Barbara "Babs" Gordon might be familiar to some readers. She's Batgirl and the daughter of Commissioner Gordon. She's also Oracle, a superhero hacker and virtuosic problem-solver. In The Oracle Code she's not only grappling with the ghosts and secrets of her new home at the Arkham Center for Independence (ACI), she's also adjusting to life in a wheelchair after a gunshot wound results in paraplegia.

At first Babs doesn't want to make new friends with the other people at ACI. She's busy with long days of therapy and long nights of ghostly tales and nightmares. But as soon as she starts digging into the ACI's secrets, she discovers mysteries and problems she can't help but try to solve. It's a quick read with lots of action, but it's emotionally complex as well. Author Nijkamp spoke with Romper about tackling this iconic character and about jumping into the world of graphic novels and comics.

Romper: What was your familiarity with Barbara Gordon before tackling this project? What draws you to her?

Marieke Nijkamp: My first introduction to Gotham and the Bat Family was Batman: The Animated Series, way back when. So I knew of Barbara-as-Batgirl, but I fell in love with Barbara-as-Oracle when I read Birds of Prey. And as a disabled author, she just means a whole lot to me. We don’t often get to see disabled characters in media, let alone disabled superheroes, so to be able to bring that experience back to the page was an honor and a privilege.

The emotions surrounding her accident, her new disability, and her displacement to the new world of the Arkham Center are complex. The reader is firmly in her head through the ups and downs. What was it like crafting a story where right off the bat, we're dealing with some heady issues?

On the one hand, The Oracle Code is a mystery, full of ghost stories. On the other, it’s a book about rediscovery and finding yourself, and in the first couple of pages of the book, Babs is thrust headlong onto that path.

At times, it was pretty intimidating, but I knew from the start that I wanted to try to do Babs’s journey justice and not shy away from the anger and grief that she’s feeling. After all, figuring out who we are doesn’t come easy for most of us, and it certainly isn’t easy when you’re a teen. The struggles Babs is going through are valid, so personally, I think they deserve to be explored and discussed.

Is she grasping for a problem or a puzzle to solve? Does she want to get back to her old life of hacking? Or is it more that she notices patterns and her instincts tell her to follow her gut?

Early on during Babs’s stay at the ACI, she has a phone conversation with her father where he tells her to try and she tells him she is trying, but she’s the puzzle now — and she doesn’t know how to solve it. To me, that moment is illustrative for Babs’s struggle. She’s always seen the world in patterns and puzzles, and she’s always able to solve those, but now she finds herself in a situation where there isn’t a simple solution. So, above anything else, she’s grasping for a sense of normalcy.

Unconsciously, that means grasping for puzzles too. Because once she does realize there are mysteries around her, that goes a long way toward helping her regain a sense of control and agency — a sense of self.

Barbara has a lot of friendships in the book, but the hardest one for her to maintain is with her hacking buddy Ben, why is that?

I think a lot of people who are or become disabled or ill will recognize that situation. People can be scared or unsure of how to react, they don’t always know how to deal with disability or illness. And for Babs and Ben, it’s a struggle to figure out how to adjust.

Why is disability representation important?

Professor Rudine Sims Bishop wrote the quintessential work on representation in fiction when she wrote her "Mirrors, Windows, and Sliding Glass Doors" [essay] in Perspectives. She said:

“Literature transforms human experience and reflects it back to us, and in that reflection we can see our own lives and experiences as part of the larger human experience. Reading, then, becomes a means of self-affirmation, and readers often seek their mirrors in books.”

What makes Barbara such a compelling superhero?

Because she’s headstrong and loyal and she doesn’t give up. Those are her superpowers. She finds what she’s good at and she uses that to save the world, which is so empowering.

Working with artists on a graphic novel must have been a really cool collaboration. What was it like seeing your book translated into images? What depth does it add to the story?

I loved it. Manuel’s art really brought the world and the story to life. And it may be a cliché, but that doesn’t make it less true: a picture really is worth a thousand words. Manuel could do so much with background, expressions, world-building, that I could never have accomplished in words alone. So from the very first moment, the fun lay in finding the right balance between what happened in the art and what happened with words, so they could play off each other and add a whole extra layer of story.

Are there any other details or aspects of this story you're dying to talk about?

Manuel and I had so much fun adding geeky details to the story. From the posters in Babs’s room, to the various t-shirts and clothes the girls wear… All those little details probably tell you a whole lot about who we are as people too.

The Oracle Code by Marieke Nijkamp, illustrated by Manuel Preitano, is out now from DC Comics.