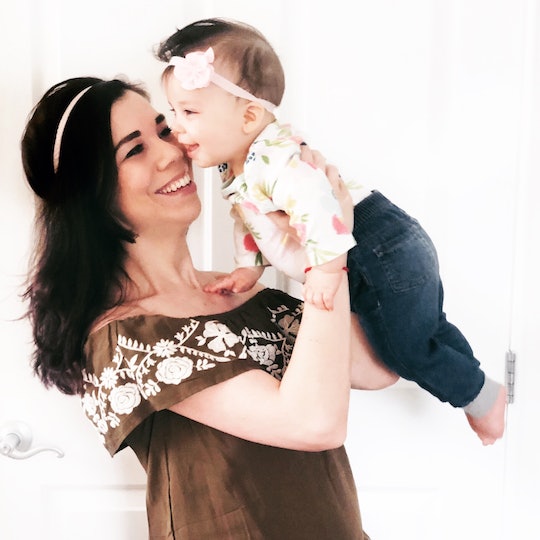 They Do Grow Up So Fast, & We Need To Stop Acting Like That's A Bad Thing

There are a handful of comments that I’m used to hearing about my baby on a regular basis (many of which are from complete strangers, much to my overwhelming exasperation). But one stands out to me, as though it’s on an endless loop, because I’ve been hearing it since before my daughter was even born: “Don’t blink! They grow up so fast.”

Most recently, I was at the grocery story when the woman working the register smiled at my baby, then turned to me and said, “Isn’t it terrible that they grow up?”

The question caught me off guard, not because I hadn’t heard this sentiment before, but that she phrased it in such a dramatic way — as though watching your child grow up was some kind of devastating and unexpected plot twist, or like we were living out the Lost Boys’ plot from Peter Pan IRL.

I wasn’t exactly sure how to respond to her, and so I laughed it off at the time, but her question bugged me the entire time I was driving home. Most pressingly, I thought of all the parents who don't get to see their children grow up, whether it’s from miscarriage or suffering the trauma of losing a child. To them, the idea of watching a baby blossom into a toddler, or a toddler become a grade-schooler, would be a gift.

But the grocery store clerk’s comment was not an isolated incident. I’ve had family members tell me to “savor the moment,” when my daughter wasn’t even a month old yet, and neighbors can never help but remark, “it goes by before you know it” as they pass us by on a walk.

And, believe me, I do know it. I’m a super-nostalgic person by nature, with a tendency to find myself longing for moments as I’m still in them, creating memories out of the present day before it’s finished. My daughter is almost 11 months old, and even though there’s so much ahead of us, I will still catch myself reminiscing about the early weeks and romanticizing those sleepless nights as I recall what it was like to cuddle a newborn.

However, it’s impossible to savor everything, and the pressure to do so is totally ridiculous. Who could savor the moments of sheer frustration, the absolute exhaustion of sleep deprivation, or the sensation of being completely overwhelmed and lonely, and yet, never alone. If anyone tries to say that they’ve indeed savored all of that, they’re either remembering it wrong, or they’re just plain lying.

New moms are already facing so much pressure surrounding how to properly parent — from the constant barrage of “breast is best” ideology to rigorous demands regarding safe sleep. On top of that, we’re made to feel guilty if we don’t cherish every last second with our newborns, as though somehow we’re going to end up old and bitter if we don’t relish in the 2 a.m. wakeups and diaper blowouts in the car. So when moms hear that warning of “Don’t blink!” phrased in a sing-song manner, it stings because we're doing it all wrong, and we'll never get the moment back.

On the heels of that, it’s frustrating as hell because trying to hold onto all of it is a fool’s errand — one that will leave you missing out on what's happening right now if you’re constantly trying to imprint a moment into your brain. A taunt like "you're going to miss it" is not productive, not a mindfulness technique. No one reaches a higher plane of flow from fixating on the cruel march of time.

It’s time that we let go of the idea that growing up is tragic. Without the passing of time, none of it ends up being precious at all — it’s the very growth of our children in the future that makes us able to look back fondly at the past. And while it might be bittersweet to realize that an era in our lives has come and gone, it shouldn’t be completely devastating to see our children age; in fact, it’s something to be celebrated. It’s kind of the entire goal of having kids to begin with.

Because time will pass, whether we like it or not — whether we “savor” each moment or not. It’s up to us to decide how we handle the shifting of chapters and changing of seasons. We can choose to get lost in a rabbit hole of nostalgia, looking back at every previous stage with rose-colored glasses as more time passes without our knowledge. Or, alternatively, we can choose to simply be grateful that we have that time to begin with.

We can choose to hold onto the good days, let go of the times that were hard, and not beat ourselves up for forgetting some of it along the way. We can hold our babies, who are already heavier than a week ago, and just be for that moment.