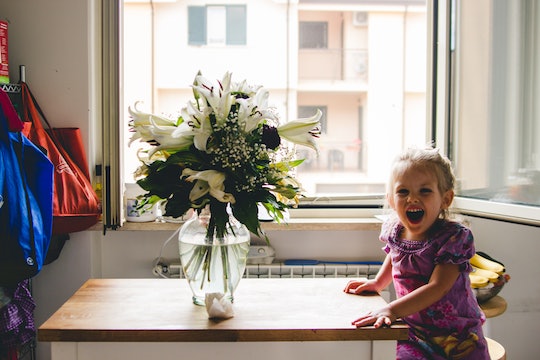 Yep, My Daughter Is "That Child"

That Child. You know the one I am talking about. The kid you saw having an epic meltdown in the grocery store while their mother stood stoically by. Maybe she was wearing her poker face, bravely pushing her shopping cart as her child continued with her big tears and even bigger cries. I bet you thought, “Nope. Not me. I will never have that child." I bet you also thought of the million ways you would've handled that situation, and how That Child’s mother just wasn’t making the cut. I remember having those same thoughts. I remember thinking, No, it'll never be me. Until it was. Yep, my daughter is That Child.

I think back on the days before I had children of my own when I would secretly judge other parents in public when their kids were acting out. I'd go over the situation in my head so easily, a rolodex of different solutions that would've worked better — none of them involving tears, crying, or screaming. I remember telling myself that I'd do it better when it was my turn; that I'd handle it differently; that my kid just wouldn't ever behave like that. And it was all for naught. I am a parent times two now. I'd like to say I've done it differently since my number was called; that I've handled the tantrums better; that my daughters don't ever behave like that. But I know I haven't. Sometimes I wonder if parenthood was purposely designed to make a mockery of such naive thinking. Of course, you don’t know just how naive those thoughts are at the time because you’re just an outsider. An observer. Watching these helpless parents with their cranky, crying, snot-laden children and pitying them. Judging them. Sometimes thinking, Phew, thank God I don’t have children; I dodged a bullet there!

From the minute your child is born you have to make decisions. What they will eat? Where they will sleep? Will you vaccinate or not? Will you home school? How long will you will breastfeed? Are you even planning to breastfeed? Will you bed share or co-sleep? Now until forever, the decisions are never-ending.

Then we have the parent who isn’t, as I refer to it, “there” yet. Their child hasn’t hit the Terrible Twos or, Heaven forbid, become a threenager yet. They're friends with parents whose older children have growing brains in the thick of an emotional overdose and they just can’t comprehend their sweet baby ever acting so downright horrible. “No, not my child,” they think. More like "Not my child," they hope.

After two children, I've learned that, at each stage, parenthood will make a mockery of us. From the minute your child is born you have to make decisions. What they will eat? Where they will sleep? Will you vaccinate or not? Will you home school? How long will you will breastfeed? Are you even planning to breastfeed? Will you bed share or co-sleep? Now until forever, the decisions are never-ending. Sometimes you think you’ve decided all there is to decided before you give birth, but then you're sitting in a hospital bed, holding this brand-new human who is as much a stranger to you as you are to them, and you realize that you made a decision for a child who wasn’t yours yet. You realize the cardinal rule of parenting: You know nothing. So you reluctantly change your mind, overhaul everything you thought you'd already decided, until you succumb to the fact that, for all your planning, you're still in way over your head.

My child is That Child, and right here, right now, I’m owning it. I love her regardless.

And so this track continues forward as your child grows. You plan to do one thing, and then change your mind because that doesn’t work for the child you actually have. Every now and then, your first decision works out for you, and just when you start to get cocky about that win, your ever-growing child changes up the entire game on you.

Before my daughter was born, I swore that she'd never sleep in bed with me. Well, she did bed-share with me until she was 3, and now her sister sleeps in her place. I said I'd never breastfeed a child until they were old enough to “ask for it," but I did, and she does. And after Sadie was born, everyone told me to prepare for the Terrible Twos, Threes and sometimes Fours. I'd seen the full extent of Sadie's blossoming personality by then and I didn't even bother telling myself "no, not my child," because I already knew. I knew one day it would be my child.

My daughter is indeed That Child. We have meltdowns getting ready to go to public places, while we're in public places, and the best are when we're leaving public places. They happen without fail. They are as routine as the hours on a clock. She screams a big cry so high-pitched as I buckle her into her carseat that my ears ring. She then clings to the same exact carseat when it's time to go in the house, forcing me to pry her death-gripped fingers from the cup holder, afterwards hurling her flailing body from one arm, as I carry her sister in the carseat in the other arm. I've never hated the flight of stairs from where I park my car, to our house — more than I do now.

Sometimes, and only if I am really really lucky, she might even start to disrobe in the midst of a fit while we are out trying to do the normal things that families like ours do. There is no better place to start taking of your clothes than at the bowling alley, the grocery store, or at the playground. Those are indeed my favorite kind of tantrums.

No matter your status, your privilege, your parenting style, your feelings on discipline, your breastfeeding relationship, your birth plan, your sleep method du jour — it happens. Even when you think you can actually escape parenthood without going through it like the rest of us, you can't.

My child is That Child, and right here, right now, I’m owning it. I love her regardless. But the real newsflash here is that yours will be too. Maybe not today, or even tomorrow, but I promise you that one day it’s going to slap you in the face too, and all of your “nevers” and “nopes” will kick you in the butt for being so naive. As a parent, your version of That Child may look vastly different than mine. Or maybe it's the same. But for all our planning, there is no way of shaking it: Your kid will eventually be That Child. There is no escaping it. It's the one parenting promise that holds true. No matter your status, your privilege, your parenting style, your feelings on discipline, your breastfeeding relationship, your birth plan, your sleep method du jour — it happens. Even when you think you can actually escape parenthood without going through it like the rest of us, you can't.

We don’t escape That Child. They turn up eventually, I promise you. But here's the advantage: When you become a parent, you realize that you're not the only one with That Child. There are millions of us around the world standing in solidarity with you. We don't walk by and judge, because we already understand. As a non-parent, it's so easy to feel like parenting is an island unto ourselves. In lots of ways, it is, but in this particular way, I've learned it's not. The grace that I've been given in these moments, in some of my least favorite times being a parent, has been a relief. When I vent to my friends about how frustrating it's been, they comfort me with ridiculously funny stories of their own. I've realized that if they can laugh about it now I eventually can, too.