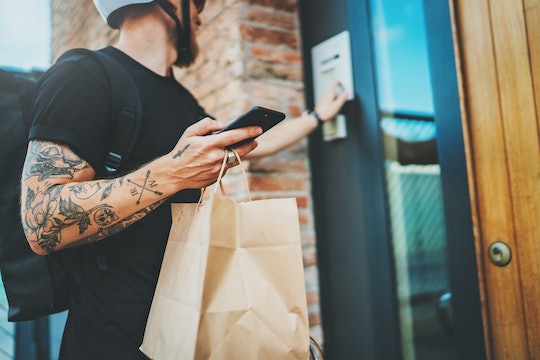 If you've ever had an inkling in the back of your mind that maybe delivery drivers have tasted your food before bringing it to your home, a new survey conducted by US Foods has revealed that you were probably onto something. Indeed, according to recent findings, a surprising number of delivery drivers admitted to sneaking in a taste of your takeout dinner, so you might want to have a closer look at your next pad thai order. Just sayin'...

According to the new survey conducted by US Foods — a restaurant food supplier and distributor, according to TODAY — about 1 in 4, or 28 percent, of the 500 delivery workers surveyed said that they have "taken food from an order." Uh oh... Now, to be fair, those findings seem to suggest that the other 72 percent of drivers probably haven't eaten from their customers' meals, or least admitted to doing so. Still, 28 percent feels high.

However, when you consider the many stories shared on Reddit of drivers picking up food and not delivering it, a driver taking a small sampling isn't that surprising. Earlier this month, for instance, a man in Pennsylvania ordered ribs from a local barbecue restaurant and found that two out of six of his ribs were reportedly eaten and the rest of them had a bite taken out of them, according to VICE.

Chrissy Teigen has even taken to Twitter to share her experiences. "I think my postmate just ate my 99 cent jack in the box tacos. it says 'delivered at 11:52' but here I am, alone and taco free," she wrote on Twitter in 2017.

In fact, people often to take to Twitter share their delivery experiences. "My Uber eats delivery driver ate my fries," one person tweeted.

"Delivery driver ate my pizza... no joke," another wrote, along with a photo of a pizza with a slice missing.

Another shared, "My Wingstop delivery driver just told me he ate some of my fries on the way here because he was a little hungry, lmfao bro what."

"I'm 90% sure that my Uber eats delivery driver ate the cherry from my milkshake and I only noticed when I got to the bottom," one more shared on Twitter.

Romper reached out to Uber Eats, Grubhub, Postmates, and Door Dash for comment regarding the findings, but did not receive an immediate response.

While this situation isn't completely preventable (unless restaurants used tamper-evident labels to seal the food, as US Foods noted), some of these apps do have policies in place for when this does happen. A representative for Postmates, for instance, told NPR that food tampering cases account for less than .06 percent of the reports it has received, and that the app requires its drivers to agree that the foods arrive tamper-free.

And it's not just the actual food that attracts drivers; the smells are apparently pretty appealing, too. The survey found that 54 percent of drivers are tempted by the smells of the food that they deliver. And, as you might have expected, most customers who were surveyed said they think that their driver eating a few fries from their order is "a pretty big deal" and 85 percent of participants are in favor of restaurants using tamper-evident labels.