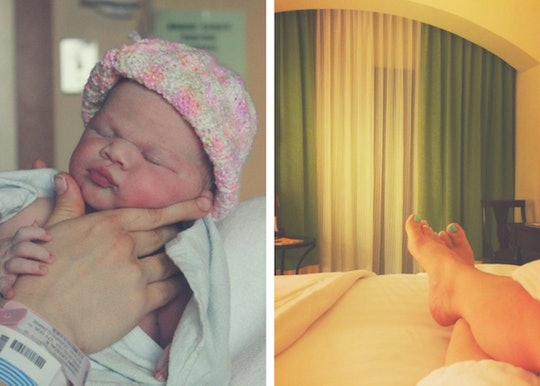 Yes, I Give Myself As Much Care As My Baby

People tell you that having a baby will change you, but until that baby drops, you have no idea what they mean. During my first pregnancy I followed all the rules — no caffeine, no lunch meat, and a daily throat-fisting of prenatal vitamins. Taking care of my body was the way I took care of my baby. But I'd had women tell me that after delivery, taking care of my baby might take priority over taking care of me.

In my house, I'm the one who requires the aloe-infused, Cool To The Touch Kleenex™ during colds. My husband once powered through his work day with appendicitis, and only went to the hospital for a quick appendectomy after he finished a proposal and a staff meeting. I am either completely well, or I am ringing death's doorbell, funeral flowers in hand. There is no in between.

After my daughter was born, I realized I'm still just as extra while recovering from childbirth. While I'm happy to rock unmedicated deliveries, I'm also equally happy to have people bring me food in bed while I convalesce. While other women beg to be released from the hospital, I'm telling the nurse that my insurance will cover the full 48 hours, and if they can't discharge me for another day I'll just stoically bear through it. So how did my mission to tend to my own bodily care go after baby? I'd say it went so-so.

HER: I loved having nurses who would help take care of my kid while I slept and people on staff at the push of a button who would bring me a Sprite. And the nursery was heaven for her and for me. Some mothers would get a little wistful about the potentially un-baby-friendly spectacle of a nurse wheeling your newborn out of the room, but both of you are recovering from childbirth and I said happily, "See you in three hours, sweetie!"

ME: I milked that room service three times a day, and while the nurse was in there smashing down on my uterus I didn't try to stop them from fluffing my pillow.

I lived and died by witch hazel pads, and when I tried to dab with toilet paper for the first time I realized I was in the end stages of giving birth to a bowling ball.

I did have a strong maternal instinct, and once they kicked me out of the hospital, I kicked it into gear taking care of my baby the way I wanted to be taken care of — with the ultimate attention to detail. But while everything about my daughter's care was loving and nurturing, everything about my own care was horrifying.

HER: I dutifully recorded her poops and pees as wonderfully exciting and reassuring signs that my breastmilk was sustaining human life.

ME: My own poops and pees were just a horrifying source of anxiety. That episiotomy made going to the bathroom the most terrifyingly stressful thing I'd ever done. I clung to the spray bottle of warm water far longer than I should have because I was terrified to touch the swollen disaster my crotch had become. We still call my first postpartum poop "he who shall not be named."

I lived and died by witch hazel pads, and when I tried to dab with toilet paper for the first time I realized I was in the end stages of giving birth to a bowling ball. Just like any time I'm crowning, I howled for my husband to bring me a mirror so I could inspect the damage. He lied and said he couldn't find one, but that it really didn't look bad. He's a dirty liar, and I'm grateful for it.

Diaper changes for our newborn were no big deal. But by the time I got brave enough to wipe my own butt with something other than a rudimentary bidet, my child was almost a month old. I was totally fine just hosing my nethers for all eternity with a sports bottle from the gym, or just showering off every time I had to pee.

HER: Bath time for baby was absolutely magical. I'd gently massage her little arms and legs with a soft pink wash cloth, taking care not to disturb the belly button stump. When that fell off I put it in a baby book, noting how many days it took and drawing little hearts around our last physical tie to my pregnancy.

ME: I suppose my equivalent milestone was the time I went to the bathroom and passed a blood clot the size of a mandarin orange. I screamed in horror and yelled at my husband to get a jar. (I'm realizing there was a lot of yelling in my husband's life postpartum.)

I'm not sure if I fished the blob out of the toilet because I was afraid I was dying or because I thought it might be a lost twin. But I took the blob to my OB's office, and the nurse assured me that my uterus wasn't falling out in pieces. Strange how it wasn't as adorable when I lost my last physical pieces of the pregnancy.

When I experienced pain I just assumed I was being a wuss about it.

HER: Feeding my child was a sense of pride for me. I'd had a fairly traumatic delivery, and my baby didn't sleep unless I held her. So I latched on to the one area of motherhood I seemed to be winning — breastfeeding.

The day my milk came in I came running topless out of the bathroom laughing hysterically. I'm not exaggerating when I say each of my boobs was the size of a healthy seedless watermelon. I was such a dairy cow that my kid got full from one breast per feeding.

She was gaining weight at record speed, so I felt pretty good about my lucky win. Go me!!!!

ME: I'd been told that pain while feeding meant something was wrong, but I'd also been told by a lactation consultant that my latch was fine. So when I experienced pain I just assumed I was being a wuss about it. I figured the pain would get better, so I just slathered on nipple cream like it was frosting on a cupcake and waited.

But on night four, my baby's sweet coos from her crib sent me into a hysterical fit of tears. My entire body was on pins and needles in anticipation of her razor sharp latch, and my husband gently told me that I needed to feed her or he'd grab a bottle of formula. Neither choice was wrong, but the choice was mine.

I bit down on my water bottle nozzle as she latched, and I got through it. But it was a rough couple of weeks until we figured out we were dealing with thrush and mastitis. That's the last time I'd try to be a martyr, and the moment I realized that my self care was still a vital part of caring for my baby.

More Like This
Does Pumped Breast Milk Have Antibodies? Experts Weigh In
Why Does My Baby Cough While Breastfeeding? Experts Explain
Gathre’s Winnie The Pooh Collection Is Finally Here
23 Sweet Quotes To Dedicate To Your Rainbow Baby