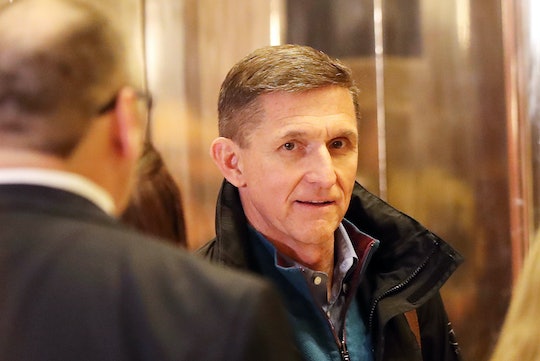 On Sunday afternoon, Edgar Maddison Welch, a man from North Carolina, entered Comet Ping Pong Pizzeria in D.C. holding an AR-15 assault-style rifle. He was inspired by #Pizzagate, a conspiracy theory connecting former Secretary of State Hillary Clinton to a sex trafficking ring allegedly housed at Ping Pong. Now, developments have emerged suggesting that the son of President-elect Donald Trump's pick for national security advisor believes in that same #Pizzagate conspiracy. That's right. Michael Flynn Jr. embraced the Pizzagate fake news conspiracy, and this is something that the president-elect and his chosen national security adviser should have to answer for.

Welch had arrived at Ping Pong Pizzeria hoping to rescue juvenile sex slaves. According to D.C. police, he surrendered after searching the premises for 45 minutes. He was satisfied that there were no sex slaves to be found, contrary to the prolific fake news stories he had been reading. Court documents show that the 28-year-old was arraigned Monday on various charges including assault with a dangerous weapon, according to NBC News.

And it was after news of Welch's attack broke on Sunday that Michael Flynn Jr. — also known as Michael G. Flynn — tweeted: "Until #Pizzagate proven to be false, it'll remain a story." The younger Flynn is the son of Michael T. Flynn, the retired Army general and former director of the Defense Intelligence Agency who was recently picked for Trump's Cabinet. Romper has reached out to Trump transition team representatives regarding the conspiracy theory, Flynn's online behavior, and whether Trump plans to broach the subject with retired Lt. Gen. Flynn himself, and is awaiting a response.

Taking a step back: What exactly is #Pizzagate, and why on God's green earth does the son of the incoming national security advisor have a dog in this fight? According to a New York Times article tracing the story, Pizzagate goes back to early November, when users at an online message board called 4Chan referenced a leaked email from John Podesta, then the chairman of Clinton's campaign. In the email, Ping Pong was mentioned as the spot hosting a Clinton fundraiser.

From there, a Reddit subreddit called r/The_Donald created a prolific Pizzagate board making bizarre connections between Podesta's email and an imagined child trafficking ring. According to The Washington Post, the board included disturbing images of child sex slaves stolen from random online venues, which were falsely attributed as scenes taking place at Ping Pong. In the weeks leading up to Welch's attack, James Alefantis, the owner of Ping Pong, received hundreds of death threats, according to The Times, and his employees were threatened as well.

In response, Alefantis contacted the Federal Bureau of Investigation, and D.C. police told The Times in late November that they were "monitoring the situation." According to The Times, Alefantis and his staff were "most concerned" that images of children had been taken from "the personal accounts of friends who had 'liked' Comet Ping Pong online" and subsequently used at fake news websites with false captions stating the children were victims of child trafficking. The parents of these children have reportedly hired lawyers in hopes that their children's photos will be taken down from these websites.

As the so-called mainstream media thoroughly debunked Pizzagate in November, conspiracy theorists used the complete lack of evidence as further proof that a suspiciously efficient cover-up was in play. An early November article about Pizzagate in the Washington City Paper noted that the original threads at 4Chan and Reddit frequently referenced Podesta's apparent soft spot for pizza, as revealed in his emails. Will Sommer at the Paper summarized the early pizza theorist's reactions:

Why, they wondered, did Podesta have a handkerchief with a "pizza-related" map on it? And why did Podesta get so many emails about eating pizza? The answer to any reasonable person would be that Podesta eats pizza sometimes ... To the "alt-right", though, "pizza" became a suspected code word for illegal sex trafficking.

Given the hysterical tenor of the Pizzagate devout, it makes some sense that a man from North Carolina entered Ping Pong with an assault rifle. But what about Michael G. Flynn? The younger Flynn's conspiracist-supporting Tweet linked to the Twitter account of Jack Posobiec, a member of a group called Citizens4Trump who claims that Sunday's assault on Ping Pong was staged by the amorphous Clinton conspiracy.

And all of this is apparently sane in the eyes of Flynn, who serves as his father's chief of staff. As a recent Post article about the younger Flynn's Pizzagate Tweet notes, "Flynn's son isn't someone who just happens to be related to an appointee to a major post in the Trump Cabinet. He's someone who has advised his father at the highest level — making his embrace of baseless conspiracy theories a very legitimate issue."

This week on CNN, news anchor Erin Burnett questioned whether Trump should say something about the son of his own Cabinet pick espousing support for a conspiracy theory that led directly to violence. "Should Trump share some responsibility himself?" Burnett asked. "To say enough. Enough ... I don't want to see these things. They're lies, and they're hateful."

However, Trump has needed prodding in the past to call out misbehavior or inappropriate actions that, if not stemming from those in his camp, ran parallel to his campaign. As CNN's Sara Ganim pointed out last month, following a rally held by white nationalists in Washington, D.C. in November, it took two days before a Trump spokesperson released a statement denouncing the group's Nazi salutes and commentary, which included the phrase "Hail Trump."

"There seems to be a pattern in the Trump administration of waiting until the last moment," Oren Segal, director of the Anti-Defamation League, told Ganim. "And we just don't have the luxury for that. When there are Nazi salutes in D.C., it's important to condemn it at the moment."

So while it's clear that Trump should denounce the spread of misinformation — in this case, a dangerous conspiracy theory about child sex trafficking — it's probably wise to not hold your breath.