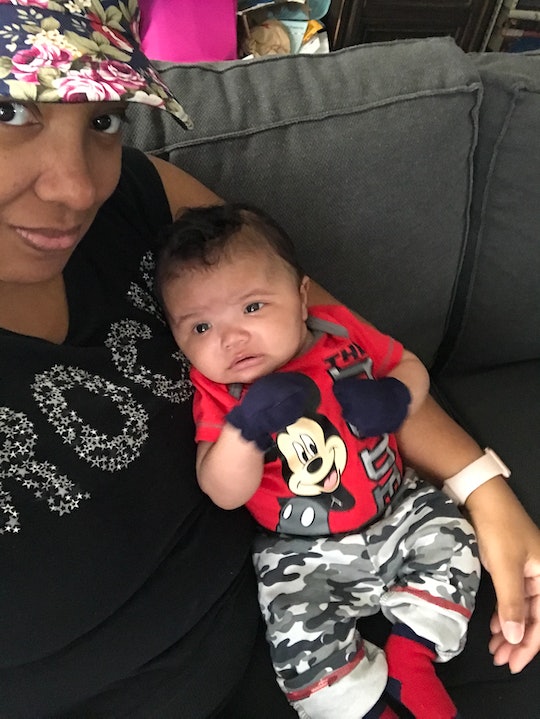 Yes, You Can Be Lonely With A Newborn

I spent my teen years babysitting, but when I had my first daughter, I felt completely thrown. My husband took a few days off after the birth of our daughter, Anneka, and that helped a great deal, but once he was back at work, I questioned myself. I'd read all of the parenting books, but I felt wholly unprepared. And I began to feel an emotion I hadn't expected: loneliness. Of course, I had this new person with me, a person to love and to cuddle, but I wish someone had told me that life with a newborn can be lonely.

Anneka was born on December 19, a week before Christmas. She was already overdue and we were afraid she'd be born on Christmas day. When they decided to induce me five days after my due date, I was afraid and excited. My husband stayed right by my side, along with my mother, there to keep me calm and tell me what to expect. Once Anneka was in my arms, I remember thinking that I would never feel alone again.

Arriving home from the hospital on Christmas Eve, we were greeted by family from both sides; by Anneka's grandmothers, aunts and uncles. We had a Christmas celebration, with everyone passing around the newest member of our family and taking pictures with her. My mother didn't want to put baby Anneka down, and surrendered her to my husband's mother only when she had to cook. I remember feeling so beyond loved and blessed.

The following week, my husband went back to work. At the time he worked at a big box store on the north side of Chicago, while we lived on the south side, near downtown. Our families barely visited after that, mostly due to the weather. Chicago is notorious for harsh winters. All through the months of December, January and February, we had snow storm after snow storm. The temperatures fell below zero many times and it was too hard for my mother to take public transportation to get to me. On top of that, my best friend lived all the way in the northern suburbs, and though she drove, she had her own children, including her own newborn daughter.

I remember a night where Anneka wouldn't stop crying. I'm a very patient person when it comes to kids, but this night was unlike any other. Anneka wouldn't go to sleep and as soon as she would doze off in my arms, she'd wake up crying again. I was confused and terrified. My mother was on the phone trying to give me advice. My husband wasn't answering my texts and I wasn't too familiar with any of my neighbors. At the end of my rope, I began crying. I was a few minutes from calling 911 and rushing my baby to the hospital.

By the time I heard from my husband, the situation had gotten worse — by which I mean me. He called to ask what was wrong and I was crying so hard he could barely understand me. My mind began to race about all of the things that could possibly be wrong with our baby. He told me he had to stay after work to help with a shipment they had to restock and I thought with horror that I would have to deal with this alone, and I would probably always have to.

I figured out what the culprit was when my baby stopped crying to burp, then threw up a decent amount of milk onto my shoulder and down my back. I had simply overfed her and upset her tummy. Once she brought it up, and I cleaned her and myself up, she fell asleep peacefully in my arms. Bry got home a few hours later that night to see me still holding our little baby in my arms, afraid to put her down.

It is normal to feel lonely, especially in the beginning. Even now, as a mom of four, there are times when I feel lonely, even while trying to find time to myself.

Postpartum depression affects 10-15 percent of women, according to the World Health Organization. Paternity leave is rarely paid, a few progressive companies being the exception. The time taken can range from a few days to a week or two, meaning that women are often on their own and susceptible to challenging emotional terrain. Even in the best situations and with a lot of help, being a new mom can be scary and difficult. At times, I questioned, after the birth of each of my children, if I was starting to feel too overwhelmed and sad. I spoke with my OB-GYN at my postpartum appointments about how I was feeling mentally. I knew what to look out for, especially this last time with my son. Being educated about postpartum depression and knowing what the signs are means you don't have to suffer in silence. It's also very important to be open and honest with your doctor.

I've had help quite often, from family coming to visit and help from my daughters. Now that I'm in my late 30s with four kids, more often than not I'm searching for alone time. I often need peace and quiet to write, nap or even just to watch YouTube videos about people who decided to live in vans and travel.

But of course you usually don't hear that side of it. It seems as if no one really talks about the loneliness you feel when you're home alone with your newborn and your partner goes back to work.

I honestly didn't know what to expect after giving birth the first time. I didn't know how alone I would feel because you assume that the baby will provide some sort of companionship. But to all of the new moms out there, I want you to know that it's OK to feel lonely and that you should reach out to a friend or relative who's been through it so you know it's not just you. The newborn period is not always the dreamy, romantic, spiritual time of bonding that people tell you to expect. There sometimes are tears and confusion, and you're absolutely not alone in experiencing that.

More Like This
Why Does My Baby Cough While Breastfeeding? Experts Explain
9 Reasons Why Some Women Can't Breastfeed
The Morning Rush Is Parenting At Its Most Essential
Sex And Mom Guilt: When I Date Someone New, Am I Cheating On My Kids?